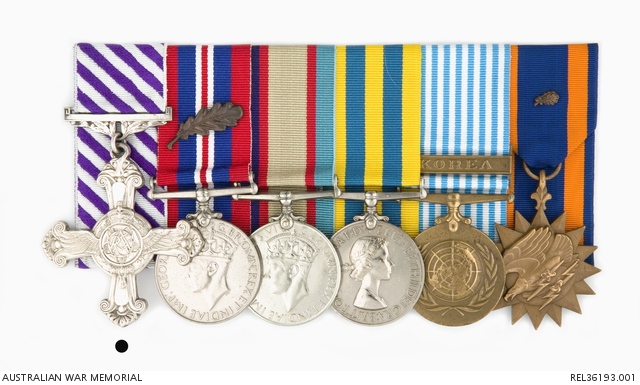 Distinguished Flying Cross awarded to Flight Lieutenant E W Guy, for gallantry while serving with 77 Squadron, RAAF, in Korea during 1952. Edgar Wesley (Wes) Guy was born in April 1922, on the island of Samarai, Papua New Guinea. He was educated at Box Hill Grammar and Wesley College, Melbourne, going on to complete the Associated Teachers Training Institute Diploma. After two years teaching at Essendon Grammar School, he enlisted in the RAAF as an aircrew trainee in April 1942. Guy undertook flying training in Australia and graduated as a sergeant pilot. Initially selected for dive-bomber training, he was instead posted to the Elementary Flying Instructor's course at Tamworth, NSW. Despite being grounded for six months for dog-fighting with a fellow student, he completed the course, and was commissioned and sent to Benalla Elementary Flying Training School, teaching student pilots. He excelled as an instructor, and in 1944 was sent to the Central Flying School (CFS) at Point Cook, VIC, to train potential new instructors. At the end of the war, Guy elected to remain in the service, and in August 1945 was posted to 33 Squadron, flying Dakota aircraft in the south west Pacific. After a further stint of instructing, he was selected to participate in the Empire Flying School course for instructors in the UK, and was also awarded the Commendation for Meritorious Service in the Air, in recognition of his achievements. In 1952, Guy was posted to 77 Squadron in Korea, flying Meteor F.8 jets. During his six month tour, he became a flight commander, flew 178 operational sorties and was awarded the Distinguished Flying Cross (DFC) and US Air Medal. Back in Australia, he became Chief Flying Instructor of the Advanced Flying Training School at CFS. In 1959, with the rank of squadron leader, Guy resigned from the RAAF to join the Department of Civil Aviation, becoming Examiner of Airmen in the Territory of Papua and New Guinea. He later managed a number of regional air services, including his own 'Wesguy Aviation Services', in Australia and New Guinea, and in 1981 established the Government Flying Unit (now the RAAF VIP Flight). Wes Guy's last job before retirement in 1983 was as Superintendent of Flying Operations with the Civil Aviation Division in Papua New Guinea. The citation for the DFC reads as follows: 'Flight Lieutenant Edgar Wesley Guy was a member of Number 77 (Interceptor/Fighter) Squadron, Royal Australian Air Force, Korea, from February, 1952, until August, 1952, and over the last three months of this period held the appointment of Flight Commander. On 27th August, 1952, Flight Lieutenant Guy led the Squadron in a rocket attack against an enemy Divisional Headquarters in North Korea. The target, located in most difficult terrain, was heavily defended, and visibility was reduced to a minimum due to adverse weather. By his daring and brilliant leadership, Flight Lieutenant Guy located the position, led the Squadron into attack, and completely destroyed the target. During his operational tour, Flight Lieutenant Guy carried out 174 individual sorties, all of which were flown in Meteor Jet Fighter Aircraft, against the enemy, including 80 strike attacks against defended enemy positions, troop and supply areas and lines of communication. He personally led the Squadron on many of those attacks. Throughout his entire operational tour, Flight Lieutenant Guy consistently displayed personal courage, leadership and ability of a very high order, bringing great credit upon himself and the Royal Australian Air Force.' Guy later recorded that the operation mentioned in the citation was his last in Korea, as the CO of 77 Squadron, Wing Commander Jack ('Congo') Kinninmont, felt that he was becoming too complacent and was a danger to himself.