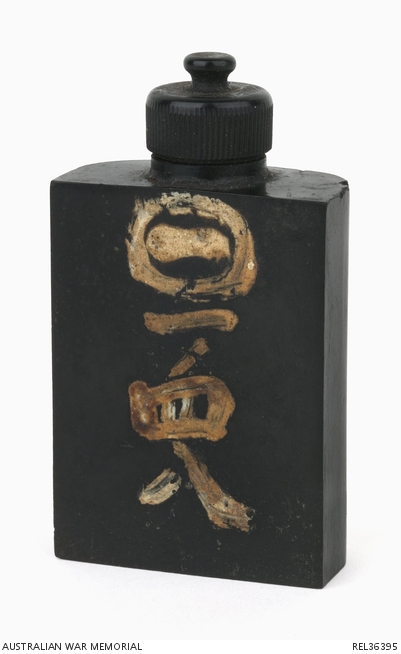 Small black Bakelite oil bottle for a Japanese firearm. The bottle has one curved and one flat side, with a screw top lid bearing a thin metal rod with a piece of cotton rag tied to the tip, which would normally be suspended in the gun oil. The flat side bears two hand painted Japanese characters in white, which translate 'No 48 of Group 1'.

John William Marsh was born at Dungog, NSW, on 13 July 1917. He was working as a radio mechanic when he enlisted in the Citizen’s Military Force in August 1940, where he was allocated the service number N14787. He served as a signalman, and was later promoted to sergeant, with signals units within Australian, with 1 and 10 Australian Divisions. He was discharged at his request in July 1942 so that he could join the Second AIF, where he was allocated the service number NX102441. Marsh served with M Special Unit as a specialist radio operator coastwatcher. This military intelligence reconnaissance unit gathered information by sending small teams behind enemy lines. The maintenance of radio contact was vital to the success of the missions. Marsh was sent to New Guinea on 28 September, returning to Sydney for six weeks training with the Allied Intelligence Bureau (Z Special Unit) at the beginning of December 1942. Sergeant Marsh returned to coastwatcher duties with M Special Unit in New Guinea in June 1943, acting as a wireless telegraphist instructor for the Allied Intelligence Bureau in August and September. In December 1943 he moved to New Britain. During the Japanese withdrawal from the western section of New Britain Marsh was a member of a party of special operatives which organised local natives to act as guerillas, harassing the retreating enemy. In February and March 1944 these irregulars killed 286 Japanese for the loss of two men. Marsh was withdrawn in May 1944 after spending eight months in enemy territory. He was mentioned in despatches for his ability and determination, especially for his skill in maintaining radio contact with headquarters while hampered with a faulty wireless set and flat batteries, while being pursued by the Japanese. On 28 September 1944 Marsh was again landed on New Britain, on the south east coast, by submarine, to act as signaller for a party which marched 140 miles through enemy held territory to take up clandestine coast watching on the north coast to prepare for Allied landings on the island. Late in 1944 Marsh was attached to the Allied Intelligence Bureau intercept station in New Britain. In January 1945 he was hospitalised for a week at 105 Casualty Clearing Station at Jacquinot Bay, suffering dyspepsia, debility and neurosis, before returning to the intercept station until 13 September 1945. He was discharged in November 1945. Marsh kept this oil bottle, which he found on the body of a dead Japanese, as a souvenir of his service.