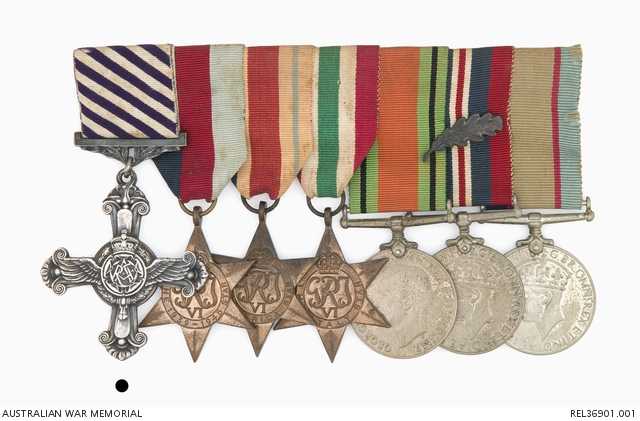 Distinguished Flying Cross. Engraved on reverse with recipient's name and date of issue (1945).

Related to the service of Frederick Leslie Lomas, born 18 June 1914 at Port Macquarie, NSW. Lomas, a student of Nhill, Victoria, enlisted on 10 November 1940 at Melbourne. After elementary training in Australia, he embarked for overseas service, arriving in Egypt on 25 September and was immediately posted to 208 Squadron (RAF), a tactical and reconnaissance squadron, flying both the Lysander and Hurricane. He received training in aerial photography, local and combat flying during October; at the time, the squadron was recovering from an expensive year of operations, having been decimated in Greece in early 1941 and just returned from three months in Syria and was in the process of completing a move to the Egyptian Western Desert. On 18 November 1941 when the Eighth Army launched Operation Crusader in Lybia, 208 Squadron provided advance reconnaissance. Lomas’s logbook shows the squadron jumping from one temporary landing ground to another, almost on a daily basis. On 20 November, flying a tactical reconnaissance flight over Omar, Lomas was hit by anti-aircraft fire and noted in his logbook ‘crash landed – made member late arrivals club’. Lomas continued flying photo reconnaissance (PR) patrols until the middle of March 1942 when he transferred to 451 Squadron, RAAF. This squadron had been withdrawn from operations in late January and placed on garrison duty in Syria for the remainder of 1942. Lomas undertook patrols and training, with no action or intercepts. On 1 November 1942, he was transferred to 74 Operational Training Unit (74 OTU) at Aquir in Palestine as an instructor on and was mentioned in despatches on 11 March 1943; he was promoted to Flight Lieutenant soon after. At the start of August 1943 Lomas transferred to 680 (Reconnaissance) Squadron, RAF, converting to Spitfires; he remained with this squadron for a year, undertaking constant PR missions over targets in Greece, and the islands of Crete, Rhodes, Leros, Kos, Calino, Amorgos, Cyclades and Levinthos. On 3 February 1944, whilst flying a PR mission over Crete and Cyclades, Lomas recorded ‘bad petrol leak – 37 gallons at Malime – glided last 20 miles to base’. Although details are unknown, Lomas commanded a number of detached flights over his period with 680 Squadron, with ‘considerable’ success. On 11 August 1944, he was transferred to 2 Aircraft Delivery Unit (2 ADU), delivering of single and twin engined aircraft around the Middle East until transferred to 2 FU in late October. Lomas married a member of the WAAF on 11 November. A month later, on 10 December, Lomas crash landed his Spitfire (EF 275) at Idhra and was reported to be ‘seriously injured’. Lomas was notified of the award of a DFC on 11 January 1945; six days later he was removed from the ‘seriously injured’ list. A medical report of 18 April 1945 noted that he had suffered a head injury in the accident and resultant post traumatic personality disorder and recommended his repatriation to Australia on medical grounds. The citation for his DFC reads: 'Flight Lieutenant Lomas has for a considerable period been flight commander of a detached flight in the western desert in which capacity he has shown administrative ability and has won the confidence of pilots. As pilot he has distinguished himself on many occasions and has displayed resolution and initiative on all missions. This officer has completed several low level photographic sorties in the presence of fighter opposition. On one such flight, when returning, he discovered that owing to excessive leak very little petrol remained in the tanks forcing him to glide for twenty miles in order to ensure a safe landing. While photographing Candia Harbour on another occasion he was obliged by low clouds to complete his task almost at sea level in the face of enemy opposition.' Lomas was discharged on 17 December 1945 and died at Mitcham, Victoria on 31 March 1972.