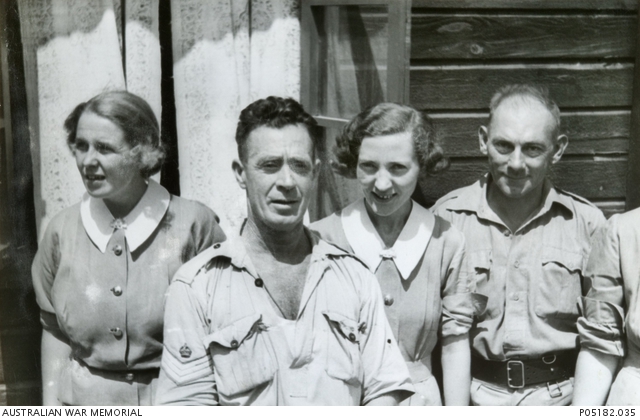 "Sr Dorothy Vines, S/Sgt C Hawking, Sr A E Whiteside, and WO Robert Otto Boese, at Qastina, Palestine, October 1940. Sister Vines later awarded RRC." Image from a large album of 86 pages containing 1858 photographs associated with the service of Lieutenant Robert Otto Boese, 2nd Battalion, during the First World War, and, as VX9912 Warrant Officer (WO) with 2/1 Casualty Clearing Station during the Second World War. Private Boese originally served six months in a Depot battalion in Australia. He later enlisted in the AIF and went to officer training at Duntroon then embarked as a Second Lieutenant with the 24th Reinforcements to the 2nd Battalion on 10 February 1917. in July 1917, following further training in England, he joined his unit in France. He received a severe wound to the chest in September 1917 requiring hospitalisation in England. He was promoted to Lieutenant in November 1917 prior to rejoining his unit. In February 1918 he was back in hospital with a fractured jaw, then spent further time at the School of Instruction before rejoining the 2nd Battalion. In March 1919 Lt Boese was a member of the 1st Division Football Team. He returned to Australia on 6 July 1919. On 27 December 1939 he enlisted in the Second AIF and served in the Middle East. VX9912 WO Boese returned with wounded soldiers aboard the Dutch ship Oranje in December 1941. He was discharged from the 2nd AIF on 9 February 1942, but resumed service with the Army in Australia. A keen photographer, he comprehensively recorded and documented (often humorously) his experience in both wars in this album providing a wonderful record of activities, personalities and locations.