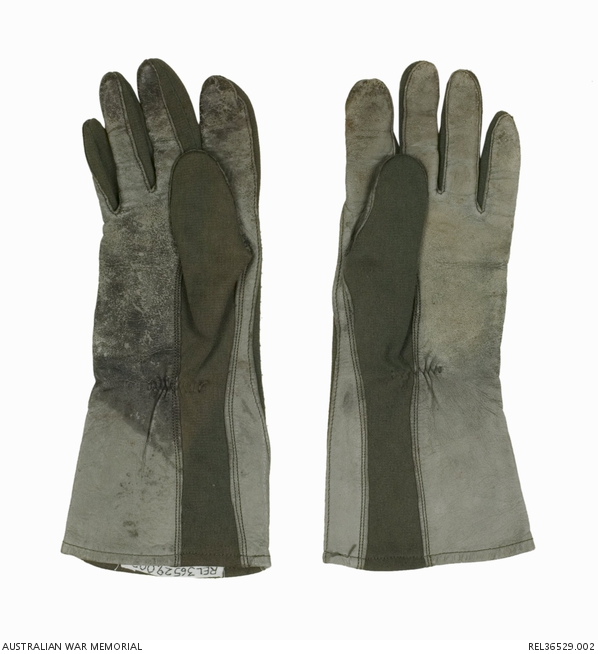 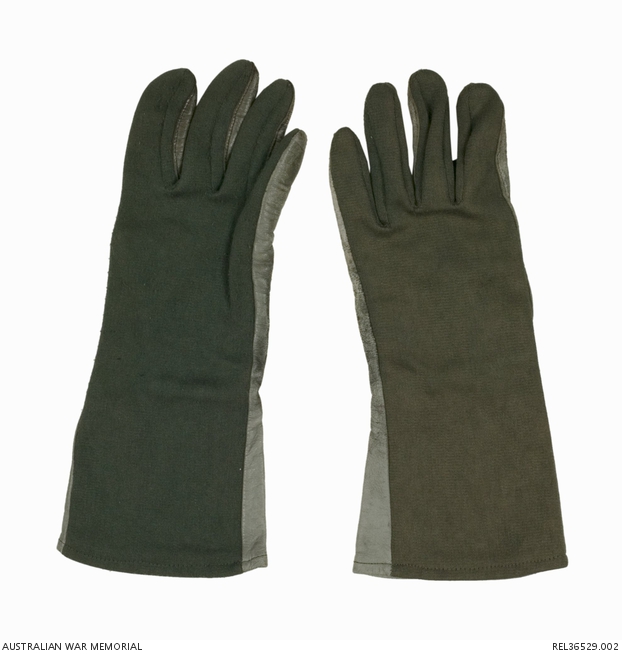 Pair of green summer flying gloves with grey leather on the inner side. The gloves extend beyond the wrist to cover a small part of the forearm. There are no manufacturer's tags, but the inside of both gloves have the numbers '1' and '8' printed in black ink.

Flying gloves worn by N225095 Section Officer Patricia Ann Furbank during the Vietnam War and throughout her subsequent service. Patricia Ann Furbank was born at Lithgow, NSW on 11 March 1942. She trained at Lithgow District Hospital in New South Wales (NSW) for four years as a nurse, graduating in 1963. She then trained for a year in obstetrics at St Margaret’s Hospital for Women in Sydney NSW. Furbank worked at Lithgow District Hospital NSW from 1964 to 1965, then at the District Hospital at Condoblin NSW in 1966, being promoted to Matron in 1967. She joined the Royal Australian Air Force Nursing Service (RAAFNS) on 5 November 1968 as a Section Officer with the service number N225095. She undertook her first stage of the RAAF Nurses course at Point Cook in 1969. The three week course included administration and sea rescue. She completed the second stage of the course at RAAF Base Richmond in 1969. This course included learning all aspects of RAAF aircraft, and training in Aeromedical Evacuations (AME). An extension of the course was established that year called the Medical Operational Support Unit (MOSU) and Furbank was one of the first nurses to graduate. After completion of training she was posted to No 3 Hospital at Richmond NSW, from which many AME flights departed and arrived, as the transport squadrons were located there. The RAAF primarily used C130 Hercules to transport wounded from the Vietnam War. RAAF Nurses were not posted to Vietnam itself, as army nurses were. Instead they were posted to RAAF Butterworth in Malaya. In November 1969 Furbank was posted to No 4 RAAF Hospital Butterworth. RAAF Nurses took part in AME between Vietnam, Butterworth and Australia. Furbank’s first Medevac was to collect wounded from Vung Tau on 12 January 1970 in a Hercules. In all Furbank carried out 84 AME trips with the RAAF in Australia and overseas, most taking place during the Vietnam War. In March 1970 she was attached to the United States Air Force (USAF) Aeromedical Evacuation Group, Clark Air Base (AB) in the Philippines. Her main role there was to evacuate wounded from Vietnam to Clark AB. On her days off she volunteered to work in the hospital as assistant nurse of the day or nurse of the night, monitoring wounded patients in Vietnam, writing up manifests for the next day’s flight and ordering special equipment and drugs. The latter she found challenging as the Americans used different drug names to the Australians. The Americans used C130 Hercules and C141 Starlifters to evacuate wounded. On a Hercules stretcher patients could be placed five deep allowing up to 74 stretcher patients to be carried per flight. During her time attached to the USAF she flew 45 trips, mostly to the Philippines, Japan and Korea, but alsoi to Washington and Alaska. In 1971 Furbank was promoted to Flying Officer and reposted to No 3 Hospital, Richmond NSW where she was Senior Nursing Officer on a busy surgical ward. In addition to this she still undertook some AME flights. Furbank worked in Darwin in the wake of Cyclone Tracy in December 1974. In 1976 she was promoted to Squadron Leader. Furbank held a variety of positions after the Vietnam War, including serving as Command Nursing Officer HQ Support Command; Matron No 6 RAAF hospital Laverton 1980-1982; Deputy Matron No 3 Hospital, Richmond; Command Nursing Officer HQ Operational Command Mar 1982 – July 1983. In 1980 Furbank was awarded the Royal Red Cross 2nd Class. She was discharged on 14 July 1983 and took up a position at St Stephen’s Hospital at Maryborough, Queensland until 1990. She was Director of Nursing/Hospital Administrator and later Chief Executive Officer at St Stephen’s. For five years after her discharge, she was a member of the RAAF Reserve so she could be called up in case of a disaster. In 1995 Furbank became President of the Macksville RSL Sub Branch. Patricia Furbank died on 27 January 2006.