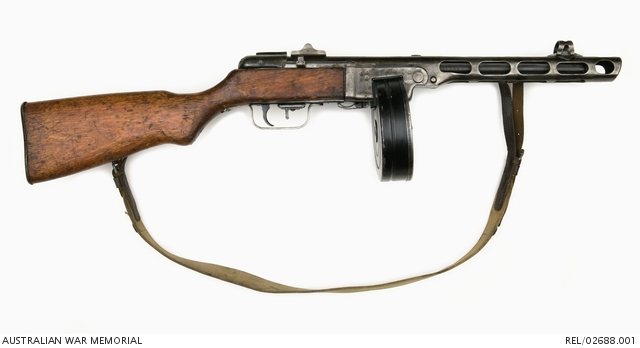 The PPSh 41 is a simple blowback operated submachine gun that fired from open bolt. To decrease the recoil impulse the gun was fitted with bolt buffer at the rear of receiver. The buffer is made from fiber and attached to the return spring guide rod. The striker is permanently fixed to the bolt face. PPSh 41 is a select fire weapon. The fire selector switch is located inside the trigger guard ahead of trigger. The safety is integrated into the charging handle and locks the bolt in forward or rearward position. The receiver and the barrel shroud is made from stamped steel. The front part of the barrel shroud extends beyond the muzzle and acted as a muzzle brake and compensator. The PPSh 41 is issued with a drum magazines with a capacity of 71 rounds of ammunition. The front sight is a post. The rear sight has flip up L shaped blade marked for 100 and 200 meters range.The receiver has Russian markings with the serial number and 1944. It is complete with a drum magazine and a webbing sling.

The PPSh 41 (Pistolet Pulemjot Shpagina model of 1941 = Shpagin submachine gun) was one of major infantry weapons used by Soviet troops during the Second World War. It is estimated that a total number of 6 million PPSh 41 submachine guns were manufactured during the Second World War. This weapon became one of the symbols of the Great Patriotic War. Retired from Soviet Army service soon after the end of the Second World War, the PPSh was widely exported to some pro Soviet countries around the world, including China, North Korea, Vietnam and many African countries.