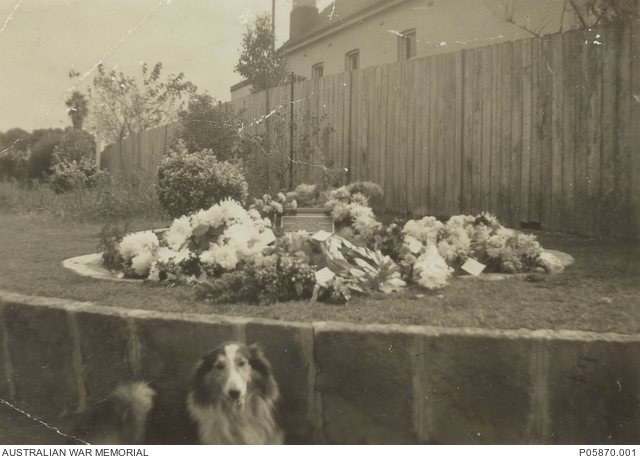 Memorial plaque and floral tribute to 420326 Flight Sergeant (Flt Sgt) Jack Dudley Wormald, 466 Squadron in Allison Park, Terrace Road, Dulwich Hill. Flt Sgt Wormald, the only child of William Challenger Wormald and Hilda May Wormald of 32 Terrace Road, was the pilot of Halifax bomber HX293 which was shot down on 15 February 1944 whilst on night operations over The Netherlands. All crew members were killed and were buried in the Grootegast (Ostend) Protestant Churchyard, Netherlands. The inscription on the plaque reads 'A tribute to the memory of our beloved son Flight Sgt Jack Dudley Wormald RAAF and his crew lost over Berlin Feb 15th 1944. Aged 21 years. God gave this brave soul wings . My Son. My Son'. The dog, named Peter, had belonged to Flt Sgt Wormald. The Memorial plaque is still displayed at the base of a tree in the north-east corner of Allison Park.