Portrait of two unidentified allied Prisoners of War (POW) in costume and blackened skin for a ... 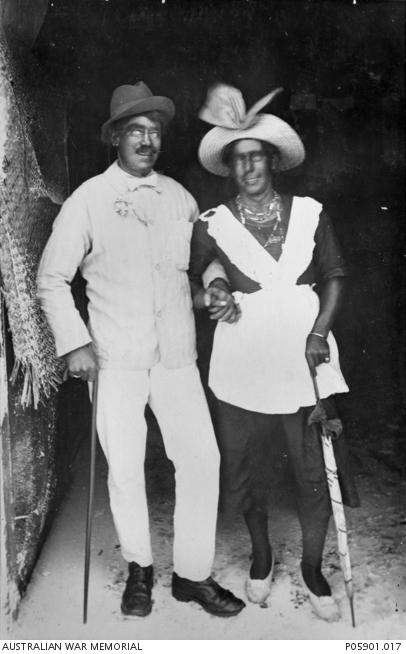 Portrait of two unidentified allied Prisoners of War (POW) in costume and blackened skin for a theatrical production at Schneidemuhl POW camp, Germany. Postcard is addressed to W. H. Gilmore, 70 George St, Pontypool, South Wales or this may be one of the soldiers in the portrait. Handwritten on the back of the photograph is "In remembrance of old times. Hoping as this will serve as a link of our commy [sic] future". One of a series of over 80 photographs of Allied POWs in the camp at Schneidemuhl, given to 3235 Corporal (Cpl) James Skelly, 55th Battalion, from Rockdale, NSW, by fellow POWs as a souvenir of their time together. Cpl Skelly was a self-described special correspondent for the Australian Red Cross while at Schneidemuhl and originally donated these photographs to the Ramsgate R.S.L. The original is stored in the AWM archive store.