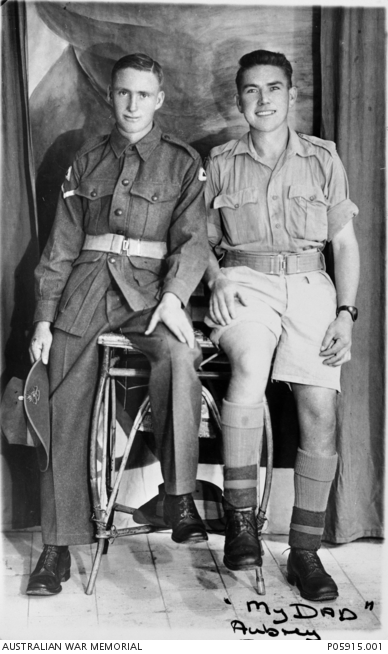 Studio portrait of Lance Corporal Hodgetts (left) and NX18836 Corporal Aubrey Vincent Ridgely, both of the 2/1 Pioneer Battalion. Aubrey Ridgely enlisted on 20 May 1940 at North Sydney, NSW. He was taken on strength with the 2/1st Pioneer Battalion ten days later and was promoted to lance corporal on 20 July. He embarked for the Middle East from Sydney on 30 September 1940, disembarking in Palestine on 2 November. He served in the Middle East for over a year, before embarking for Australia on 12 March 1942. He spent the rest of his service in Australia and was promoted to corporal on 1 July 1944. In October 1944 he was discharged, classified as B2 medically unfit. Note he is wearing his puttees wrapped around his ankles and over his socks.