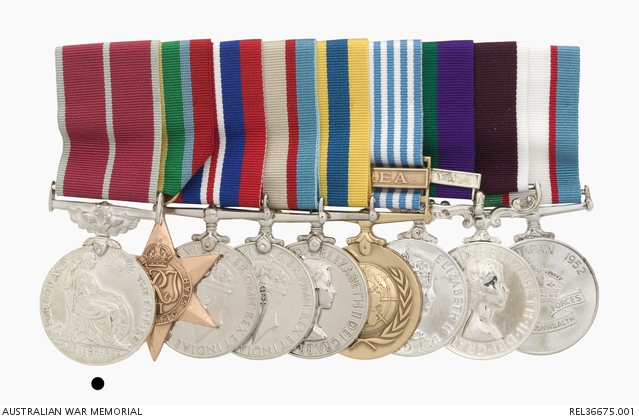 British Empire Medal awarded to Robert Henry Walford, while serving with the Royal Australian Air Force, for his work fighting massive bushfires in the Blue Mountains in 1957, when fire destroyed 158 buildings in Leura and Wentworth Falls. Walford was born on 16 April 1921 at Chatswood, NSW. He enlisted in the RAAF on 15 April 1940 as a trainee mechanic. Three months later he was classed as a fitter IIA. Walford served most of the Second World War within Australia, until 10 June 1945 when he was posted to Morotai and Tarakan with 80 Squadron, returning to Australia in December. He had been made a temporary corporal in 1941 and temporary sergeant in 1944. After the war Walford joined the Citizen Air Force, from which he was discharged in 1948 to join the permanent RAAF for a period of 12 years. He was promoted to Sergeant in January 1949. In 1950 he served in Malaya and Singapore with 38 Squadron, before transferring to 30 Communications Unit in Japan. In January 1951 he served briefly in Korea. In 1952 he trained as an air frame fitter and was promoted to flight sergeant. On 12 October 1960 Walford's 12 years with the RAAF was completed and he was discharged. He joined the RAAF Reserve the following day.