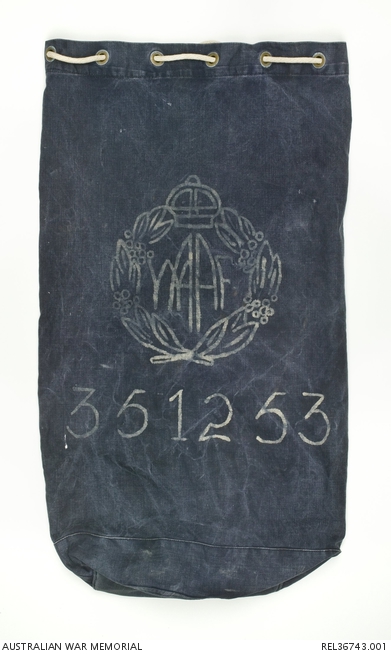 Blue canvas kit bag of standard tubular design with twelve brass eyelets, white drawrope and double stitched base panel. The outer face of the bag has been decorated in white paint by the owner with the Women's Auxiliary Australian Air Force badge, under which she has painted her service number, 351253.

Relating to the service of Beryl Frances Somerville, born in Camberley, England to Colonel George Cattell Somerville, CMG, DSO, MID, CdeG, on 21 November 1919, during the period her father was studying at the Staff College, Camberley after his service in the First World War.

The family returned to Australia in early 1920. Her elder sister Joan, enlisted with the Australian Army Physiotherapy Service on 17 September 1940 and was injured aboard Hospital Ship Manunda during the first air raid on Darwin on 19 March 1942, and was discharged immediately afterwards.

Beryl enlisted on 23 July 1941 at Sydney and served with the Women's Auxiliary Australian Air Force (WAAAF) until her discharge on 14 August 1946. She served in Townsville among other places, and reached the rank of Corporal. She decorated this kitbag herself with the badge of the WAAAF.