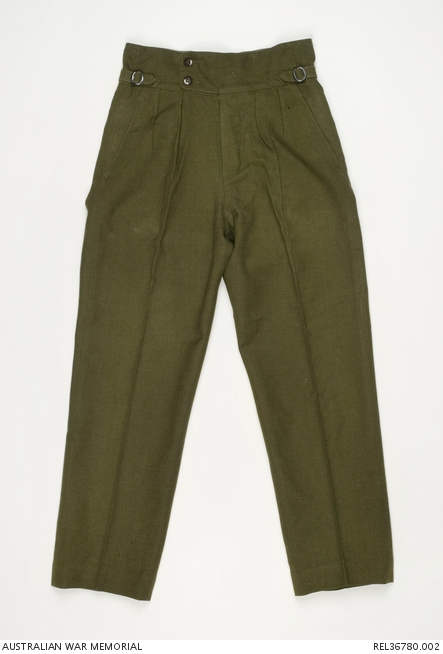 Pair of khaki wool serge Australian Army battledress trousers, double pleated, with broad waistband, slash pockets at the front and a buttoned patch pocket at the rear. Fitted with a three button fly and three buttons at the rear for attaching to the battledress blouse. A short adjusting strap with blackened steel tooth buckle is provided on each hip for waist adjustment. The waistband and fork are reinforced with khaki cotton drill, which also forms the pockets. There are three pairs of buttons fitted around the inside of the waistband for attaching braces. All buttons are brown plastic. A pair of cotton labels are sewn to the rear inside waistband, one stating 'CGCF VICTORIA Size 4 1966 ^ Creases set by Siro Set'; the other bears the owner's name and regimental number handwritten in ink.

Standard issue mid 1960s Australian battledress trousers issued to 2786678 Signalman Russell Errol Hill for his National Service. Born 17 July 1946, Hill was called up in 1967 and entered the Army on 14 April. After 10 weeks basic initial training at Kapooka, Hill undertook specific training at the School of Signals, Balcombe, Victoria; his suitablility for training was chosen based on a tone/pitch test and Hill’s natural musical ability assisted in passing this test. He passed top of his course of an entry of 20 and was judged the quickest Morse operator. Of the 20 in his course, seventeen were posted to Vietnam, while Hill and two others were retained in Australia. After a short period at Watsonia, Hill was transferred to the Rockbank Signal Receiving Station (about 60 km west of Melbourne), where he was responsible for receiving the coded incoming message from Vung Tau every 4 hours. His final post was operating the Base Radio at Portsea, Victoria.