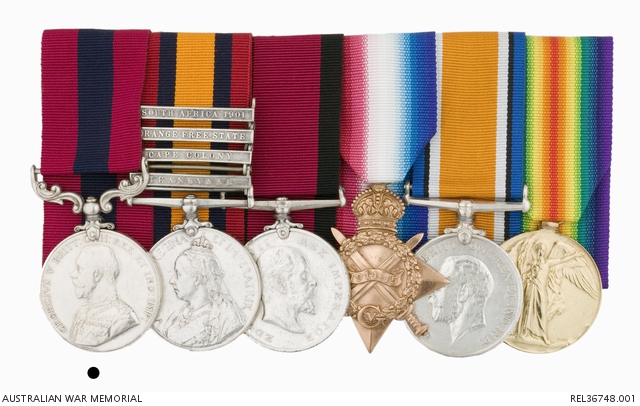 Arthur John 'Jack' Cox was born at Gosport, Hampshire in 1880. He was serving with the Hampshire Yeomanry when he volunteered for service in the Boer War, together with his twin brother. They sailed to South Africa as members of the Imperial Yeomanry. Cox later transferred to the Imperial Light Horse, a South African colonial unit raised in country. His brother was killed during the war. After the signing of the peace declaration, Cox elected to remain in South Africa, working as an assayer in the gold and diamond mines at Johannesburg and Kimberly. He remained a keen member of the militia, serving with various units - the Diamond Fields Horse, the South African Constabulary between February and June 1906, the Natal Carbineers between June and 11 September 1906, and the Kimberly Regiment of Volunteers in 1907 and 1908. While serving with the Carbineers Cox took part in the suppression of the Zulu rebellion in Natal, which ended on 3 August 1906.

Cox emigrated to Australia and was working as an assayer at Ballarat on the outbreak of the First World War. He enlisted in the AIF on 18 August 1914, and after initial training at Broadmeadows was assigned as a private, with the service number 85, to A Squadron, 4 Light Horse Regiment (4 LHR). The regiment sailed from Melbourne for overseas service on 14 October 1914 aboard HMAT A18 Wiltshire. In 1915, 4 LHR served on Gallipoli as infantry, leaving their horses behind in Egypt. Members of the regiment landed on the peninsula between 22 and 24 May. In early August 4 LHR was stationed at Ryrie's Post. Cox was wounded on 6 August, probably at Leane's Trench, to the left of Ryrie's Post, where A Squadron were involved with the defence of the trench from a Turkish attack. He received a shrapnel wound to the right shoulder and a gun shot wound to the right calf. He was evacuated to hospital in Egypt and rejoined his regiment at Gallipoli on 2 October. Nerve damage from the shoulder wound troubled him for the rest of his service. He was promoted to lance corporal on 20 October, to corporal on 10 November, and to provisional armourer sergeant on 19 November. Cox was confirmed a staff sergeant armourer at the end of January 1916.

Throughout 1916, the regiment was employed in security operations in the Suez Canal Zone. In July and August Cox was briefly detached to the Imperial Camel Corps and then to 1 Light Horse Machine Gun Section in his capacity as a specialist machine gun artificer. 4 LHR moved into Palestine at the beginning of 1917. Its first major engagement took place in the famous charge of the 4th Brigade into Beersheba on 31 October 1917. Cox was awarded the Distinguished Conduct Medal for his actions. The citation for the award reads: 'For gallantry in capturing a machine gun and crew of five gunners single handed in a redoubt south east of BEERSHEBA on the 31st October 1917. The machine gun was the means of holding a strong position, and Staff Sergeant COX shewed great bravery in capturing it under very heavy fire.' An alternative account differing in the number of men captured by Cox is given in Gullett's Volume VII of the Official History of Australia in the War of 1914-1918: 'While the fighting was proceeding in the trenches, Armourer-Sergeant A.J. Cox saw a machine-gun being hurriedly dismounted from a mule by its crew. In a minute it would have been in action at close range. He dashed at the party alone, bluffed them into surrender, and took forty prisoners.' In March 1918 Cox was promoted to Warrant Officer Class I. He returned to Australia on Anzac Leave on 15 November 1918 and settled in New South Wales.

Cox served in the militia between the world wars, as Company Quartermaster Sergeant with 36 Battalion (St George's English Rifle Regiment). In June 1941 he attempted to enlist in the Second World War, stating that he was 47 instead of 61, as was the case, but was rejected medically unfit.