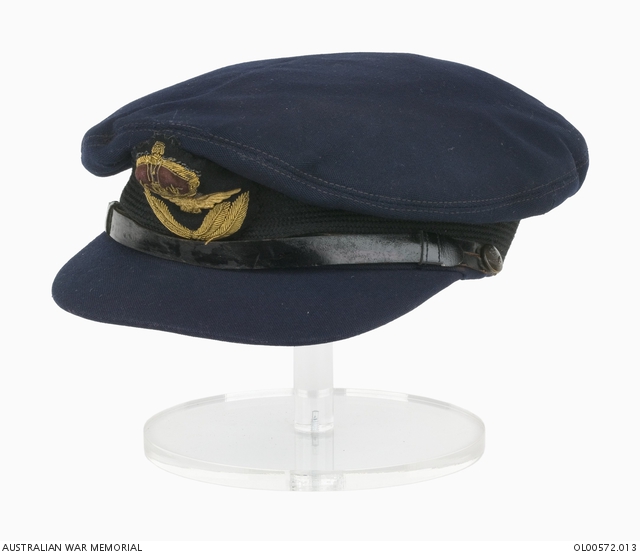 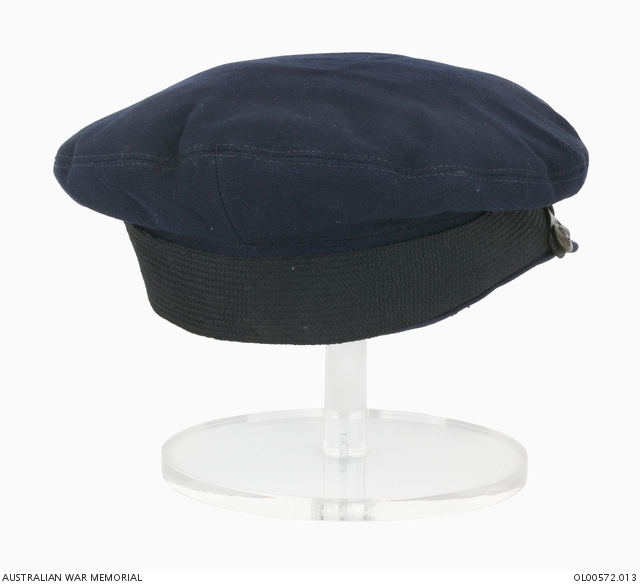 Officer's RAAF blue peaked service dress cap with dark blue mohair hatband, cap badge showing a gold bullion and velvet embroidered king's crown above a gilded metal eagle, with gold bullion embroidered laurel leaves beneath. The cap has a black patent leather chinstrap secured by two black plastic RAAF buttons. The reverse of the peak is lined with green leatherette. The inside is lined with a brown roan leather sweatband and a grey quilted cotton lining to the crown. The internal wire stay has been removed.

Related to the service of David John Shannon, born 27 May 1922 at Unley Park, South Australia; an insurance clerk who joined the RAAF Reserve on 3 July 1940 at No 5 Recruiting Centre, Adelaide, just after his 18th birthday. He then enlisted on 4 January 1941 with the Royal Australian Air Force. Assigned service number 407729 and mustered as Air Crew, Shannon commenced training at Pearce, Western Australia (WA) in March with 5 Initial Training School, then 9 Elementary Flying Training School, Cunderin WA, and finally 4 Service Flying Training School, Geraldton WA. Here, Shannon graduated as a bomber pilot in September with the rank of Pilot Officer. Six days later he embarked for England to complete his training, ending up at 19 Operational Training Unit, Kinloss, Scotland from March to early June 1942 where he converted to bombers – in this case, the Armstrong-Whitworth Whitley IV and V models. Shannon was promoted to Flying Officer on 23 March 1942 and was assigned to 106 Squadron in July 1942, flying Lancasters. His first operational flight occurred four days after joining the squadron, on 25 June, against the Focke Wulf Aircraft Works at Bremen; Shannon noted in his logbook: ‘1,100 aircraft took part’. In July he undertook further Lancaster training, often with Wing Commander Guy Gibson as his first pilot. Shannon was awarded the Distinguished Flying Cross (DFC) in January 1943 for ‘attacks on industrial targets in enemy territory’. Between June 1942 and February 1943, Shannon flew 36 missions, including five to Bremen and three each to Wismar, Hamberg, Dusseldorf, Genoa and Turin, surviving at least four flak hits over this period. On the Turin raid of 4 February 1943, his load of incendiaries caught fire in the bomb bay and had to be rapidly jettisoned, resulting in the ‘largest forest fire ever seen in Italy’.

The then Commanding Officer of 106 Squadron, Guy Gibson, left the Squadron in February 1943 to form 617 Squadron, RAF, and Shannon’s ability as a pilot saw him invited by Gibson to join him for ‘special flying operations’. Shannon readily agreed and joined 617 Squadron in March 1943, where he trained as part of the Dambusters force. On the night of 16 May 1943, he piloted one of the Lancasters in the first wave assigned to the Mohne Dam; when that target was successfully breached by the fifth mine, dropped by Flight Lieutenant Maltby, he flew to the secondary target, the Eder Dam, 100 kilometres away. After flying three unsuccessful approaches (due to the close surrounding hills and heavy fog) he was ordered by Gibson to hold off and allow Squadron Leader Maudslay’s Lancaster to try; Maudslay tried but also failed to line up his aircraft properly. Shannon was sent in again, and after two attempts dropped his bomb, but without positive results. Maudslay tried again, but his bomb overshot. Finally, Pilot Officer Les Knight’s Lancaster was sent in and Knight managed to drop his bomb perfectly. The wall of the Eder Dam collapsed ‘as if a giant hand had pushed a hole through cardboard’, according to Gibson, sending some 160 million cubic metres of water down the Eder Valley in a wall of water some four or five metres high.

Shannon was immediately awarded the Distinguished Service Order (DSO) for ‘bombing attacks on the Mohne, Eder and Sorpe Dams Germany’. He continued with 617 Squadron until October 1944, being promoted to Flight Lieutenant on 23 September 1943 and was recognised as one of the squadron’s core personnel. The squadron developed a specialist and precision bombing role and for Shannon, the remainder of the year was spent in low level training with the new 12,000 pound bombs (predecessors of the ‘Tallboy’ and 22,000 pound ‘Grand Slam’ bombs), with only four operations flown before the end of 1943. The first was against Bologna in Italy on 29 July, followed by two operations against the Dortmund-Ems Canal on 14 and 15 September (the first aborted and resulting in the ditching and death of Squadron Leader Maltby and his crew in the Channel). This appears to be Shannon’s first operational use of the new large bombs. There were two final missions on 16 and 30 December, with the former being a massed attack on the V2 rocket site at Flixecourt (noted as ‘Germany’s Secret Rocket Gun. 1 x 12,000 lb bombed 15,000. Direct hit’ in Shannon’s log book), and the latter being a return raid on a nearby flying bomb launching site.

In November 1943 he was awarded a bar to his DFC for ‘low level attack in adverse weather against heavy opposition’ (presumably for the Dortmund-Ems canal attacks).

Special operations recommenced on 4 January 1944, primarily against targets in France, including flying bomb sites at Freval (4, 21 and 25 January) and the Gnome and Rhone aircraft Factory at Limoges on 8 February. This latter raid was the first led by Wing Commander Leonard Cheshire since taking over command of 617 Squadron and the first where targets were accurately marked by a low flying aircraft (Cheshire at about 50 feet). It was also the most successful raid by the specialist squadron since the dams raid, proving both their accuracy and the need for precise target marking. Only one bomb missed its mark.

March 1944 saw a progression of vital factory targets in France bombed in the same successful manner – La Ricamerie needle bearing factory on 10 March, the Michelin tyre factory at Bergerac on 16 March and the explosives works at Angouleme on 20th (which Shannon notes ‘Good trip. Target well pranged. The 6th wizard trip in succession’). Two final factory raids on 23 and 25 March completed the month. During the first half of April, Shannon received training on Mosquitos and from 18 April flew as one of two Pathfinders for 617 Squadron, marking targets at Paris Railway Yards (18 and 20 April), Brunswick in Germany on 20 April (the first successful target-marking of a large enemy city) and Munich on 24th.

In the lead-up to D-Day, a major German military camp at Mailly-Le-Camp was bombed on 3 May before Shannon returned briefly to Lancasters for a diversionary Window-dropping exercise on the evening of 5 June between Le Harve and Boulogne to simulate an invasion fleet – well to the north of the real landing beaches in Normandy. This was one of Shannon’s least favourite missions – ‘Involved the hazardous task of flying straight and level at 3,000 feet in bright moonlight and dropping Window at the same time. (Bloody browned off).’ For the remainder of June, 617 Squadron flew seven raids to support the invasion or hit V1 flying bomb launch sites. Shannon acted as Pathfinder on six of these raids.

Shannon was fast becoming one of the RAAF’s most highly decorated pilots when he received notification of the awarding of a bar to his DSO on 1 August 1944 for ‘courage of high order on numerous sorties’. It appears that at this point, Shannon was removed from the danger of active operations and transferred to 511 Squadron, a long-range transport squadron. He had flown 69 missions. He was promoted to Squadron Leader on 1 January 1945 and transferred to 246 Squadron in March 1945. He was ultimately demobilised in December 1945. Instead of returning to Australia, Shannon opted to remain in England, joining Shell Oil as an executive. In 1963, the Australian War Memorial commissioned William Dargie to paint Shannon in England; Dargie found Shannon ‘a real dinkum Aussie…we both got a little homesick talking about Australia.’ Shannon died in 1993 a few weeks before a planned 50th reunion of Dambusters veterans.