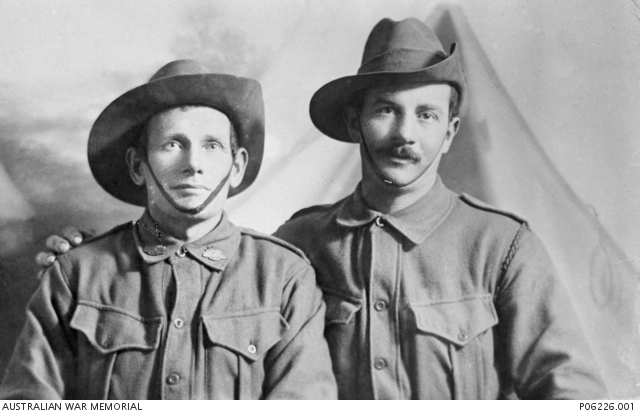 Studio portrait of 6752 Privates (Pte) William Hay (left) and 6777 Oswald McClelland (right) of Beaumont, New South Wales. Both men were part of the 22nd Reinforcements of the 13th Battalion and left Australia on the SS Port Nicholson on 4 November 1916. A farm labourer before the war, Pte Hay died from cerebro-spinal fever at the 26th General Hospital at Etaples, France, on 26 February 1917, and is buried at Etaples Military Cemetery. Also a farm labourer, Pte McClelland was in France for less than three weeks before he was taken prisoner of war (POW) at Riencourt on the 11 April 1917. He spent the remainder of the war in captivity in Germany, and was repatriated back to Australia on 31 March 1919.