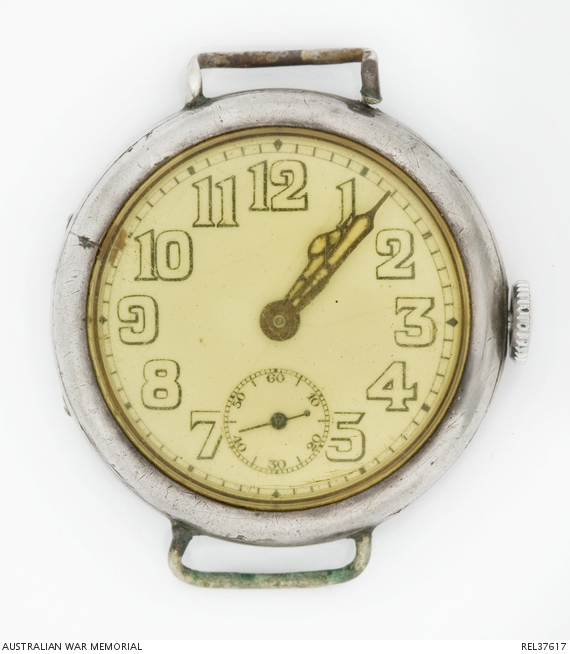 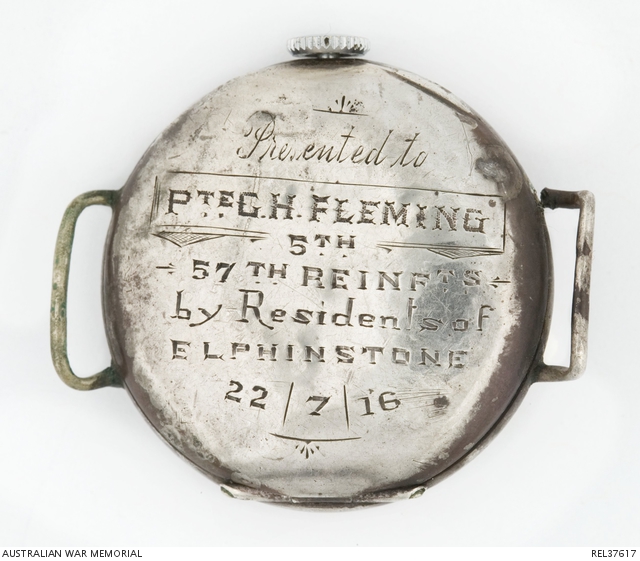 Wrist watch with silver plated metal case, brass movements and white enamel dial bearing large black outlined numbers to mark the hours. There is a separate second dial set into the bottom of the main dial, between the numbers 5 and 7. The inside of the case is marked 'M 462162', together with watchmaker's marks added each time the watch has been cleaned or repaired. The outside of the case is finely engraved 'Presented to PTE. G.H. FLEMING 5TH 57TH REINFTS by the Residents of ELPHINSTONE 22.7.16'. The watch strap is missing.

This watch was presented by the residents of Elphinstone, Victoria, to 2405 Private (later lance corporal) George Holmes Fleming to mark his enlistment, in June 1916. Fleming was born at Turrambarry near Echuca and was a 26 year old unmarried orchardist when he enlisted at Brunswick in suburban Melbourne. He named his mother, Margaret, a resident of Elphinstone, as his next of kin and it is likely that he considered the town to be his 'home' address as well. After initial training near Melbourne Fleming sailed for overseas service aboard the troopship HMAT A9 Shropshire on 25 September 1916 with the 5th reinforcements of the 57th Battalion. He undertook further training in England before joining 57 Battalion in France at the beginning of 1917. Despite frequent episodes of hospitalisation due to trench fever, influenza and chest infections, Fleming saw action in the major battles in which the 57th Battalion took part: Bullecourt in France in April 1917; Polygon Wood in Belgium in September 1917; and at Villers Bretonneux in France in April 1918. Fleming returned to Australia on 15 January 1919. His brother, James Holmes Fleming, also from Elphinstone, served with 23 Battalion, but had transferred to the 57th by the time George arrived in France. He was awarded the Distinguished Conduct Medal, the Military Medal and was mentioned in despatches.