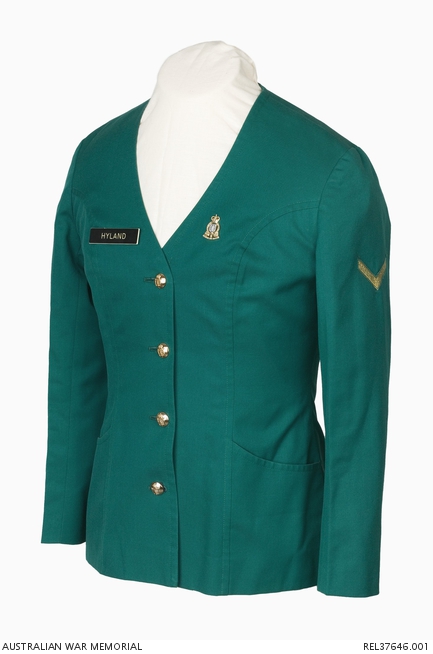 Forest green poly cotton collarless winter service dress jacket with two curved slash pockets at the hip and four gold anodised WRAAC buttons down the front, with a hook and eye attachment above the top button. Gold thread lance corporal's chevrons are sewn to each upper arm. A gold and silver anodised aluminium WRAAC badge has been pinned to the upper left breast and a black plastic name badge with the name 'HYLAND' in white is pinned to the upper right breast. The inside of the jacket is lined with dark green synthetic fabric.

Worn by Lance Corporal Linda Hyland who enlisted with the Women’s Royal Australian Army Corps (WRAAC) in February 1981. She attended the WRAAC School in Mosman, Sydney and served with the Royal Australian Army Ordnance Corps until her discharge in September 1984. Hyland was among the first group of Australian female recruits to receive weapons training, on both the L1A1 7.62mm SLR rifle and the F1 9mm sub machine gun.