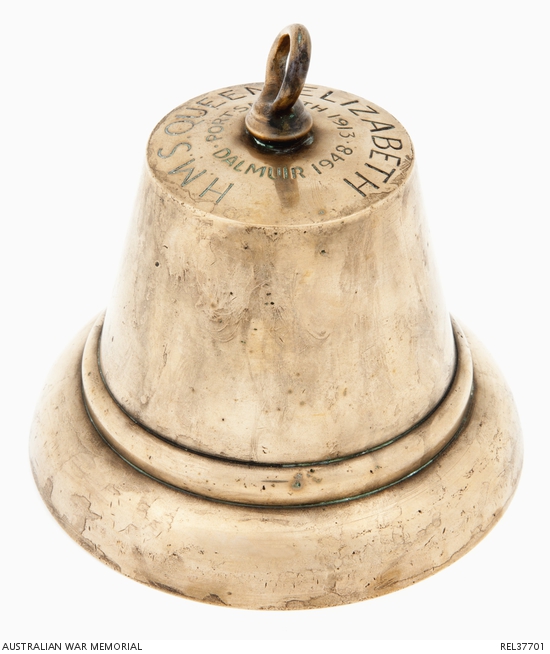 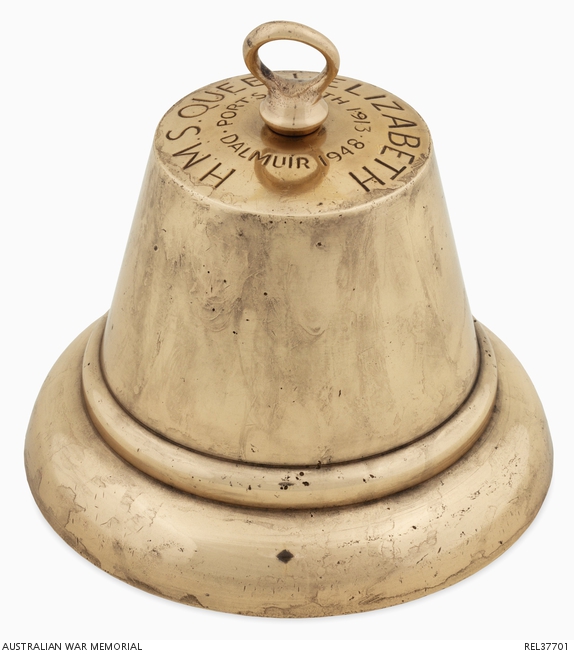 Small bronze bridge bell with a plain tapering waist, narrow single bead line and a concave sound rim. A separately cast suspender is attached to the head, which, internally, forms the suspender for the clapper, which is missing. The head is marked, in large lettering 'HMS QUEEN ELIZABETH' around its outer circumference, and 'PORTSMOUTH 1913. DALMUIR 1948' around its inner circumference.

This small, inscribed, bronze bell was mounted forward of the wheelhouse on the bridge aboard the Dreadnought class battleship, HMS 'Queen Elizabeth'. The 'Queen Elizabeth' was the first of this class, and featured oil-fired boilers, replacing the previous standard of coal, and eight 15 inch guns; she was built at the Naval dockyards of Portsmouth, England and was commissioned in 1913. The ship entered service in January 1915 and it was during trials in the Mediterranean that the battleship was diverted to the early British naval attempts to force the Dardanelles and drive Turkey out of the war. The 'Queen Elizabeth' became the flagship of the British fleet in these operations in mid-March 1915, which were repulsed by Turkish shore batteries and minefields, although many of the forts and land-based positions were damaged or destroyed by bombardments from this battleship's 15 inch guns. The failure of the navy to clear the Dardanelles led to the attempt to capture the forts, and to the landings on the western side of the Gallipoli peninsula on 25 April 1915.
During the early part of the Gallipoli campaign, HMS 'Queen Elizabeth' served as the flagship and base of operations for Mediterranean Expeditionary Force commander, General Sir Ian Hamilton and his staff. Her guns were called upon to drive off Turkish attacks and destroy positions; Charles Bean writes on the second day of the landing "I do not know how many rounds she fired during the day. It may have been no more than a dozen. We have no direct evidence of what damage they inflicted on the Turks; but she shook the hills with her reports."
On 12 May, owing to the presence of a Turkish torpedo boat which had already sunk HMS 'Goliath', the 'Queen Elizabeth' was withdrawn from the campaign to operations in the North Sea, joining the 5th Battle Squadron the Grand Fleet at Scapa Flow, but played virtually no role in any major actions for the remainder of the war.
Between the wars this battleship was the flagship of the Atlantic Fleet (1919 to 1924), and the Mediterranean Fleet (1924 to 1927, and 1930 to 1937). She underwent extensive refits in 1926-27 and 1937-41. During the Second World War the 'Queen Elizabeth' formed part of Mediterranean Fleet and participated in the evacuation of Crete in June 1941. In an attack by Italian frogmen on British shipping in Alexandria Harbour on 19 December 1941, both HMS 'Queen Elizabeth' and HMS 'Valiant' were mined and suffered serious damage. After temporary repairs in Alexandria, and more extensive ones in Norfolk, United States, the 'Queen Elizabeth' joined the British Eastern Fleet in 1945, but was placed in reserve in August. She was paid off and scrapped at Dalmuir, Clydebank, Scotland, in the shipbreaking yards of Babcock and Wlicox in July 1948.
This bell was one of the items sold off during the de-commissioning operation. It had been hung in front of the wheelhouse and used to daily sound the half-hour, and would have become a familiar and distinctive sound during the 35 years of the ship's operation. The place name and date of both the ship's launching and de-commissioning are recorded on the bell, adding to its significance as a record of its career.