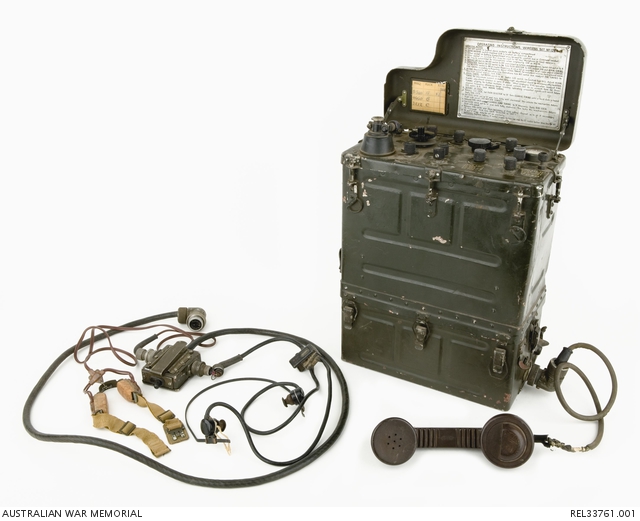 Australian wireless set No 128 Mk II and accessories. The wireless set is a dark green painted aluminium case with a fold-down lid to protect the dials and tuning knobs. This lid has several scratch marks and shows signs of being painted in a red oxide type paint over the green paint. The case has a removable base which houses the battery (not present). Also missing is the aerial. Accessories present are a belt mounted Transmit/Receive switch, a dark brown Bakelite handset with plug and a throat microphone and headset.

Development of the Australian Wireless Set No. 128 started in early 1944 with approval for production given in July 1945. Issue to units was only after the war had ceased. It replaced the Australian No.108 as an High Frequency (HF) manpack set until the introduction of the A510 in 1955, although Very High Frequency (VHF) FM sets such as the AN/PRC-9, -10 and CPRC-26 were introduced in Australia in the early 1950's. The Wireless Set Australian, No. 108 was Australia's principal manpack set in the early days of the Korean conflict (1950-1953). The physical appearance of the US Signal Corps SCR-300-A (BC-1000) VHF FM was taken as the base for the general design of the Australian Wireless Set No. 128. This approach simplified sealing and placed the centre of gravity close to the body. In order to operate with existing sets and to provide long range sky-wave communication the set operated on CW, MCW and R/T in the frequency range of 2.0 - 4.5MHz either MO or crystal controlled. The RF power output is given as approximately 0.36 watt. Miniature 1.4 volt valves are used and in its construction miniaturisation was carried out as far as possible. The base of the set housed a 162/3 volt battery, similar to that used with British Wireless Sets No. 18, 46 and 68. In addition to the operation of dry batteries, provision was made for operation from a 6 volt vibrator power supply (Unit HT Vibatory No.3 Aust.) which is interchangeable with the battery compartment for use as a ground station. There is some doubt whether the vibrator power supply was ever issued as no one has ever seen it, and it is not listed in the reprinted handbook. The set appeared to be of good reputation but was noted as being 'battery hungry'. The Mk.II version of the Australian Wireless Set No. 128 had a number of improvements of which are noted a turns counter for the Aerial Loading, a rugged lightweight handset, different connectors on the junction box, throat microphone, headset and Morse key, and the bulky carry frame was dispensed with.