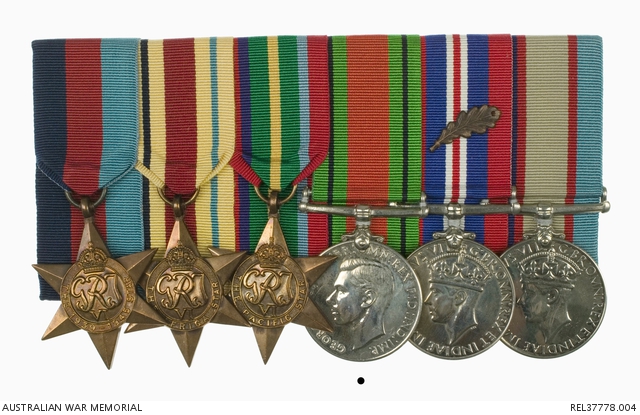 Associated with Major F L Skinner, Australian Electrical and Mechanical Engineers. Born in Orange in 1900, Francis Leonard (Len) Skinner was an apprentice fitter and turner and was serving as a senior cadet attached to the 19th Infantry (Kuringai) Regiment when he enlisted in the AIF in May 1918. The Armistice was signed prior to Private Skinner's embarkation and he was discharged. At the outbreak of the Second World War, Len Skinner was working as a mechanical engineer when he enlisted in the Second AIF and was posted to the Australian Army Ordnance Corps (AAOC) with the service number NX6892. Major Skinner was later transferred to the Australian Electrical and Mechanical Engineers (AEME) and saw service in the United Kingdom, North Africa, Lebanon, Syria, Ceylon and the South West Pacific. He was wounded at Wau, New Guinea in March 1943 and was twice Mentioned in Dispatches. He was transferred to the Reserve of Officers in February 1945. Major Skinner's father Henry Edward 'Harry' Skinner served in the Sudan with the British Royal Marines and in the First World War with 4 Battalion, AIF. Major Skinner's two sons, Harold Leonard and Laurence Frederick 'Laurie' Skinner both served with the Australian Army during the Second World War. His third son, Roy Edwin Skinner served with the Citizen Military Forces (militia) and later the Australian Regular Army and saw extensive service with the United Nations in the Middle East. The Memorial holds additional material relating to the service of the Skinner family.