A metal worker watches carefully, as the enormous chuck and cutting tool on a Scott Lathe, ... 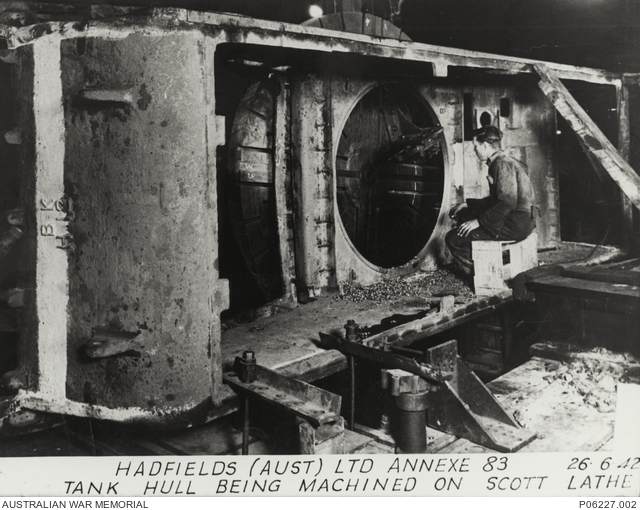 A metal worker watches carefully, as the enormous chuck and cutting tool on a Scott Lathe, machines out the turret ring on the cast hull of an Australian Cruiser (AC) tank at Hadfields Australia Ltd, (also known as Government Annexe 83). The hulls for these tanks were cast in one piece at the foundry company Bradford Kendall Ltd (Government Annexe 9/85) and then transferred to Hadfields for machining. The cast characters 'BK H12' are visible on the nose of the hull. The AC I tank was also known as the Sentinel. The AC project began in May 1940 in response to the difficulty of acquiring tanks from Britain. Australian industry had few heavy engineering plants and to design and produce an Australian tank was an ambitious project. After a fact finding mission to the USA and the despatch of a design specialist from England in 1940, a specification for the tank's design and manufacture was drawn up. The tank made use of local automotive components and available alloys. The hull, superstructure, forward transmission housing, turret, and gun mantlet were cast as single piece units. The first trials of the AC I began in 1942 and 65 AC I units plus 3 experimental tanks, known as the 'E' series were produced by 1943. Some of the 'E' Series were fitted with 25 pounder and 17 pounder guns. Never to see active service, with production ceasing in 1943, the AC Sentinel was used for training and instructional purposes only.