A group of soldiers from A Company, 4th Battalion, The Royal Australian Regiment (4RAR) sitting ... 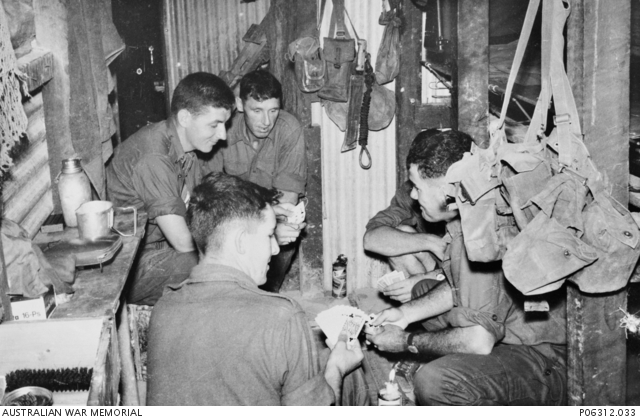 A group of soldiers from A Company, 4th Battalion, The Royal Australian Regiment (4RAR) sitting around a table in a section dugout at Gumbang enjoying a game of cards. Most of the military equipment visible is Britich Army issue. Left to right: Private (Pte) Wally Gerringsten, Pte John Cain, 43528 Pte Alan Graham (back to camera), later killed in action in Vietnam in 1969, the names of the other soldiers are unknown. A Company 4RAR were based at Gumbang between April and September 1966. This was the most southerly of the 4RAR company positions and was located on a ridge line close to the Sarawak-Kalimantan border and a major Indonesian infiltration route.