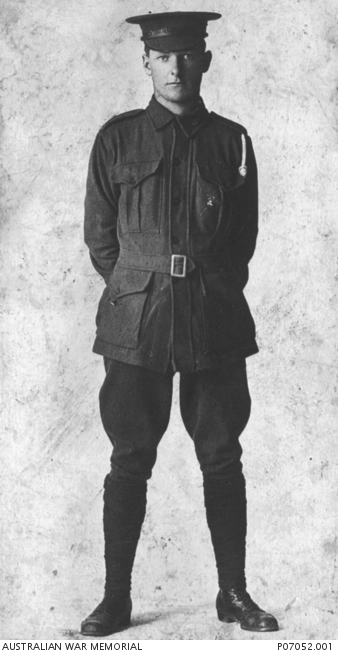 Studio portrait of 93 Private (Pte) Ernest William Moorhouse, 16th Battalion, of Hobart, Tasmania. A paymaster prior to enlistment, Moorhouse embarked from Melbourne aboard HMAT Ceramic on 22 December 1914. He was promoted to the rank of Lance Corporal (L Cpl) several days before taking part in the landing at Gallipoli on 25 April 1915. While defending the front line of the Anzac beachead at Gallipoli, L Cpl Moorhouse was reported missing on 2 May 1915. His paybook was discovered and returned to the Australian Records Office, Alexandria, showing signs of damage from shrapnel or bullet marks. A Court of Inquiry held at Serapeaum, Egypt, in April 1916 found that he had been killed in action at Gallipoli on 2 May 1915, aged 23. L Cpl Moorhouse is commemorated on the Lone Pine Memorial, Gallipoli.