Member of the Order of Australia : Major R E Skinner 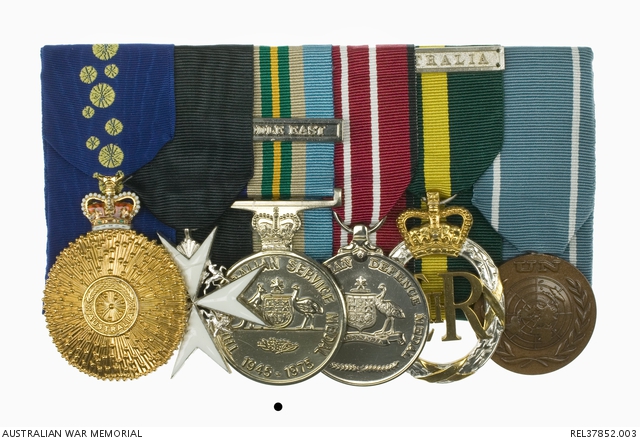 Associated with the service of Major R E Skinner, United Nations Truce Supervision Organisation (UNTSO). Roy Edwin Skinner was born in 1926. He studied engineering at the Sydney Technical College and was working at the Hydro-Electric Commission of Tasmania when he enlisted in the Royal Australian Electrical and Mechanical Engineers (RAEME) in the Citizen Military Forces (CMF) in 1951. Skinner transferred to the infantry with the 3rd Battalion (the Werriwa Regiment) in 1958 and in 1966 enlisted in the Australian Regular Army in which he served until 1970 when he rejoined the CMF until 1972. He was assigned to the 4th Battalion, Royal Australian Regiment (RAR) in Malaysia and then to a Malaysian Infantry Brigade in Borneo. From 1967 to 1969 he was seconded to the United Nations Truce Supervision Organisation (UNTSO) in Palestine and following one subsequent posting to Army Headquarters, he joined the UN's Civil Service in 1970 and served in the Middle East. He retired in 1986, but was recalled for UN service in Iraq 1991 to 1992. Roy Skinner's grandfather, Henry Edward 'Harry' Skinner served with the 4th Battalion, AIF. His father Francis Leonard 'Len' Skinner and his two brothers, Harold Leonard and Laurence Frederick 'Laurie' Skinner served with the Second AIF during the Second World War. The Memorial holds additional material relating to the service of the Skinner family.