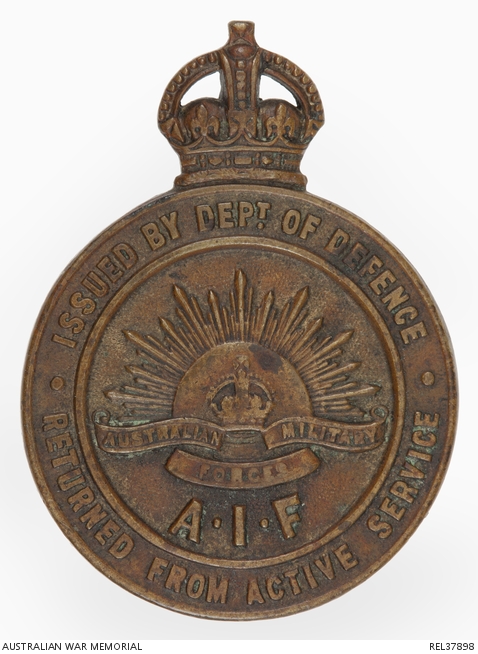 Discharged Returned Soldier badge. In the centre of the circular brass badge is the Rising Sun and 'A.I.F' surrounded by the words 'ISSUED BY DEPT OF DEFENCE RETURNED FROM ACTIVE SERVICE'. The badge is surmounted by a King's crown. The reverse of the badge is impressed with the maker's details 'STOKES AND SONS MELB' and the serial number '51550'. The badge has two brass lugs soldered to the reverse each with a brass split pin for securing the badge to clothing.

Associated with the service of Lieutenant A A Fowles, 4th Machine Gun Battalion, AIF.

Born at Inverell, NSW in 1892, Arthur Ashley Fowles entered the NSW Public Service in 1908 and enlisted in the AIF in May 1915. 2521 Private Fowles embarked aboard HMAT A9 Shropshire at Sydney on 20 August 1915, with the 7th Reinforcements to the 13th Battalion. He joined the 13th Battalion on Gallipoli on 8 December 1915.

Fowles was transferred to the 4th Machine Gun Company in March 1916 and promoted to Lance Corporal while in Egypt following the evacuation of Gallipoli. He travelled with that unit to France in June 1916 and served on the Western Front until he was detached to the Officers' Training College near Grantham, Lincolnshire in April 1917. The British Machine Gun Corps operated a depot and training ground at nearby Belton Park. Appointed 2nd Lieutenant on 29 September, Fowles joined the 4th Machine Gun Company in its positions at Belgian Chateau near Ypres on 17 October 1917.

In September 1918, Fowles was slightly injured when he was involved in a bicycle accident while riding though the French village of Barleux. Mentioned in Despatches in March 1919 for his service, Fowles returned to Australia aboard HMAT Euripides in September 1919. He received his discharge from the AIF on 22nd December 1919.

Following the war Fowles returned to the NSW Public Service. He died in January 1958.