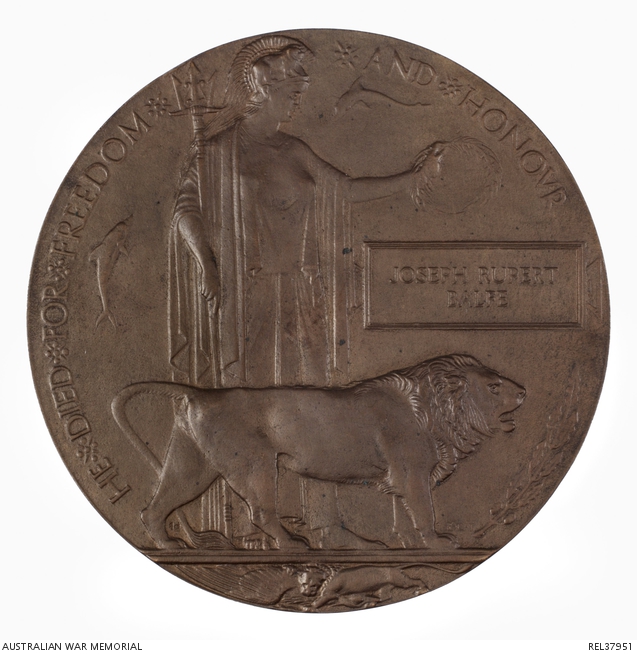 Bronze next of kin plaque, showing on the obverse, Britannia holding a laurel wreath, the British lion, dolphins, a spray of oak leaves and the words 'HE DIED FOR FREEDOM AND HONOUR' around the edge. Beneath the main figures, the British lion defeats the German eagle. The initials 'ECP', for the designer Edward Carter Preston appear above the lion's right forepaw. A raised rectangle above the lion's head bears the name 'JOSEPH RUPERT BALFE'. The plaque is contained in its original cardboard folder, with a reproduced note from King George reading, 'I join with my grateful people in sending you this memorial of a brave life given for others in the Great War. George R.I.' The back for the plaque bears the mark of the Royal Arsenal Woolwich, 'W' within a circle.

Joseph Rupert Balfe was a fifth year medical student at Melbourne University when he volunteered for service in the AIF on 15 August 1914. He had already served for four years in the Melbourne University Rifles. Ten days later he was commissioned a 2nd lieutenant and assigned to A Company, 6 Battalion.

The battalion sailed from Melbourne to Egypt on 19 October 1914, aboard HMAT A20 Hororata. Balfe was promoted to lieutenant, and placed in command of B Company on 1 February 1915. After further training the battalion sailed for Gallipoli where they landed on 25 April, as part of the second wave. Balfe was killed that day near Shrapnel Valley (also called Shrapnel Gully), during the fighting for the ridges above the beach.

A witness later wrote, 'he was leading, and very keen... two of his party came back and said he was killed, but could not bring his body back.' Balfe's body was not located and identified until the beginning of July, when his parents were formally notified of his death, although they had earlier been advised he was missing. His remains appear to have been buried near Shrapnel Valley. However, the grave could not be located after the war and his name is listed on the Lone Pine Memorial.