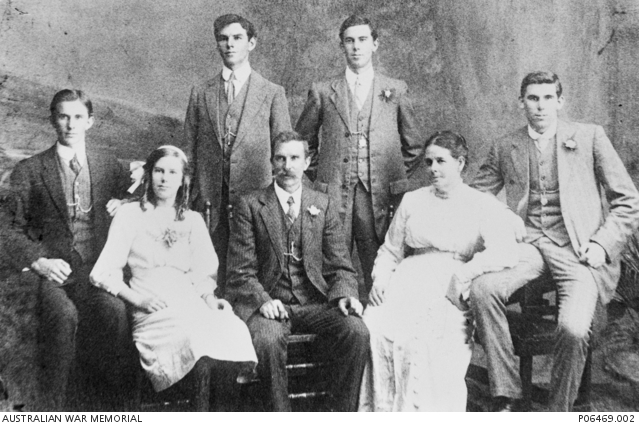 Studio portrait of the Morrison family from Midland Junction, Western Australia. Identified standing at the back on the left is 330 Lance Corporal (later Lieutenant) James Stanley Morrison. A 19 year old apprentice analyst with previous service in the Militia with the 89th Infantry prior to enlisting in the AIF on 2 September 1914, he embarked for overseas with C Company, 11th Battalion from Fremantle on 2 November 1914 aboard HMAT Ascanius (A11). While serving at Gallipoli, he was promoted to Corporal on 5 May 1915 and then in July was evacuated to Mudros for medical treatment. After further medical treatment in Egypt, he was returned to Australia in November 1915. He re-embarked as a Sergeant with the 18th Reinforcements of the 11th Battalion from Fremantle on 6 June 1916 aboard HMAT Suevic (A29). After arriving in England, he was detached for duty with Headquarters AIF in London in August 1916. He joined the 11th Battalion in France in March 1917 and after being promoted to Second Lieutenant on 26 April 1917, he transferred to the 12th Battalion in May. He was promoted to Lieutenant (Lt) on 16 August 1917 and then was wounded in action (gassed) in Belgium on 6 November 1917. Following evacuation to England for medical treatment, he returned to the 12th Battalion in March 1918. Lt Morrison married Ada Marjorie Stallion in Lambeth, UK on 17 April 1919 and brought her back to Australia where his appointment was terminated in December 1919. [See also image H00143.] Seated on the far left is 2644 Private (later Sergeant) Leslie Alfred Morrison. A 23 year old telegraphist prior to enlisting on 24 June 1915, he embarked for overseas with the 8th Reinforcements of the 11th Battalion from Fremantle on 2 September 1915 aboard HMAT Anchises (A68). After arriving in Egypt, he transferred to the 51st Battalion and was promoted to Lance Corporal on 15 March 1916. In April he transferred to the 2nd ANZAC Headquarters and in May to the 4th Division Headquarters with whom he proceeded to France in June 1916. After being transferred to the Australian Postal Corps in October 1916, he was promoted to Corporal and then Lance Sergeant on 1 November 1916 and to Extra Regimental (ER) Sergeant on 12 August 1918. In December he was invalided to England with pleurisy and returned to Australia on 21 April 1919. Seated on the far right is 2172 Private (Pte) John Max Morrison, 11th Battalion. A 24 year old telegraphist prior to enlisting on 21 April 1915, he embarked for overseas with the 6th Reinforcements from Fremantle on 6 June 1915 aboard HMAT Geelong (A2). Two days after joining the 11th Battalion at Gallipoli on 4 August 1915, he was killed in action and buried at Shell Green Cemetery, Gallipoli, Turkey. Pte Morrison later received a Mention in Despatches for gallantry at Leane's Trench on 6 August 1915 prior to being killed in action.