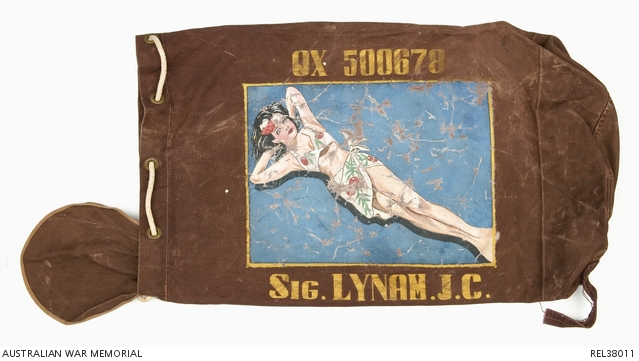 Standard brown canvas kitbag with draw-rope threaded through brass eyelets. Painted in black on one side of the bag are the words: 'QX500678 / LYNAM J.C.'. The other side is decorated in oil paint with a depiction of a pin-up girl in a reclining position, arms behind her head, wearing a bikini top and short wrap-around skirt, both decorated with cherries. There is a flower in her hair. She sits against a sky-blue background and the entire panel is bordered in yellow. The words 'QX500678' (above) and 'SIG LYNAM J.C.' (below) are stencilled in yellow either side of the painted panel.

Related to the service of Signaller John Conrad Lynam, a timber cutter, born Brisbane on 16 June 1924. Lynam served with the Civil Construction Corps from 1942 to 1944 in Queensland under number CQ14880 and also with the Volunteer Defence Corps in the Northern Territory from 1942. He enlisted at Wacol, Queensland on 18 August 1946 and served with the British Commonwealth Occupation Force (BCOF) as a Signaller, 2 Star with the Headquarters Signals Unit, in Japan until 29 January 1948 and was discharged on 9 February. This kitbag is associated with his BCOF service.