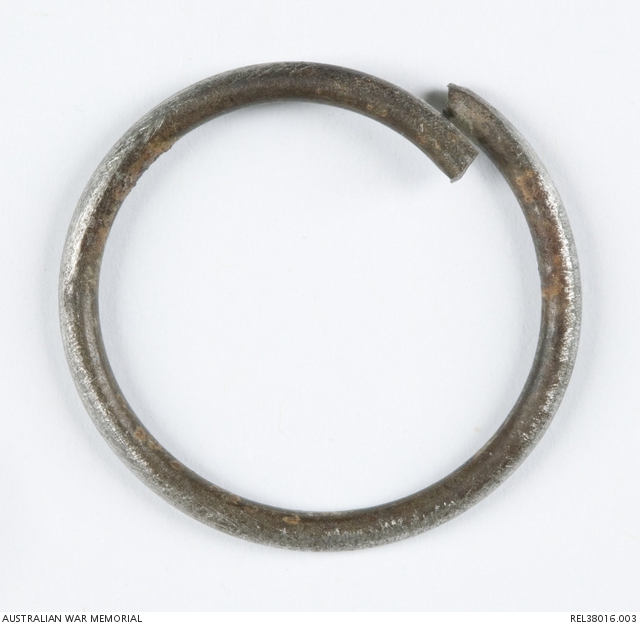 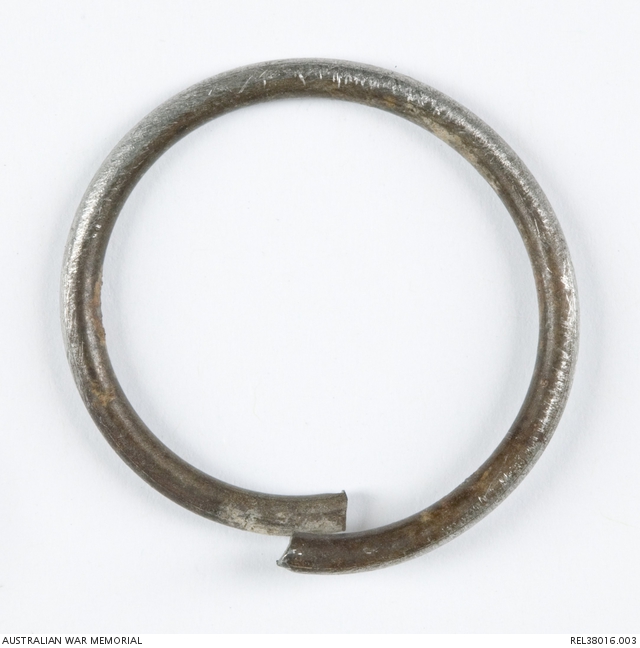 Part recovered from 9 Squadron RAAF UH-1H Iroquois helicopter A2-767 which crashed in Phuoc Tuy Vietnam on 17 April 1971. The helicopter was being employed for Medevac ()medical evacuation) during Operation Dong Khoi III, and on this day was crewed by 317930 Flying Officer Michael Francis Castles and 46672 Pilot Officer Simon Robert Ford, with door gunners 220871 Corporal Robert Albert (Bob) Stephens and Leading Aircraftman (LAC) Roy Zegers, accompanied by 8 Field Ambulance medical orderly 3170244 Lance Corporal John Francis Gillespie. Their helicopter was called out for a Medevac pickup after a member of a 50-man South Vietnamese (ARVN) patrol, operating 15 kilometres south east of Vung Tau in the Long Hai mountains, stepped on a mine, losing both legs. Australian Army Training Team (AATV) member 19883 Corporal Thomas Douglas Blackhurst, who was attached to the ARVN patrol, called in the Medevac around 3:30 pm. As the casualty was being winched the 10 metres to the hovering Iroquois, the sound of rounds hitting the rear of the craft alerted LAC Zegers to enemy gunfire, which he started to return as door gunner. The man he was firing at has since been identified as Nguyen Tan Hung. Hung’s second burst hit the engine of the Iroquois and the helicopter stopped. It fell onto the troops below, disintegrating as it fell, instantly killing both Corporal Blackhurst and a US officer (Captain Albertson, an artillery observer) and reportedly the wounded soldier being winched (subsequent reports in 2007 indicate he may have escaped the crash). The craft rolled onto its side, throwing Lance Corporal Gillespie out of the door and rolling onto him, pinning his legs, then burst into flames.

Zegers recalls ‘I grabbed the hook of my harness, closed my eyes and hung on. It seemed to take an eternity for us to hit the ground.’ Dazed but conscious, Zegers fumbled with his harness release before going to the aid of the pilots; Castles appeared alright, but Ford suffered burns to his face and hands. Meanwhile Stephens was in the burning passenger compartment trying to free Gillespie, who was calling for help from under the wreckage, but the intense heat and the weight of the Iroquois on Gillespie’s legs kept driving him back and he was forced to give up the attempt. The crew sought shelter among the rocky terrain as the firefight with the North Vietnamese continued around them, and Stephens tended to Ford’s burns. Their Iroquois continued to burn until it melted; the entire crew was picked up by another 9 Squadron helicopter at dusk.

Corporal Bob Stephens was recommended for the British Empire Medal for gallantry for his actions (the only one awarded in the Vietnam War) but this gave him little comfort and ultimately he was evacuated back to Australia and spent 12 weeks in the base psychiatric hospital Richmond RAAF base, suffering from post-traumatic stress disorder. After the crash Zegers found the thought of returning to flying terrifying, but forced himself to do so. Unfortunately he was shot down again soon after and never flew again. The incident and the thought of a leaving a mate behind continued to haunt both Stephens and Zegers and, in Stephens’ case, continued to affect his life and his ability to maintain a job. In early 2002 Zegers started working with Jim Bourke from Operation Aussies Home in an attempt to locate Gillespie’s remains and return them to Australia. This work took four years and led to the recovery of Gillespie, the identification and befriending of Nguyen Tan Hung and the donation of these components discovered at the site. John Gillespie’s funeral was held on 22 December 2007 at St Anthony’s Church, Huntingdale, Victoria.