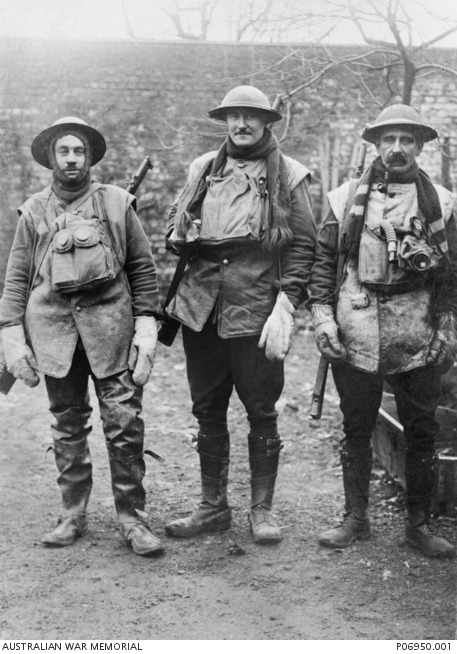 Informal portrait of three 'Burnley boys' dressed in winter clothing and wearing bags containing box respirators around their necks. Left to right: 10329 Lance Corporal (L Cpl) Sergeant Ernest William Pittard, 10th Field Company Engineers, of Richmond, Vic; B Hall; and L Cpl J Simmons (?). The men are wearing leather jerkins and mittens, and woollen scarves. L Cpl is also wearing a balaclava and rubber gumboots. During the Battle of Messines in June 1917 in Belgium, he was hit by a piece of shell from enemy fire. The shrapnel struck him in the chest hitting a coin in his breast pocket. The coin was bent by the impact and he eventually sent it home where his family had it made into a ring. Pittard attained to rank of temporary sergeant and returned to Australia on 4 July 1919.