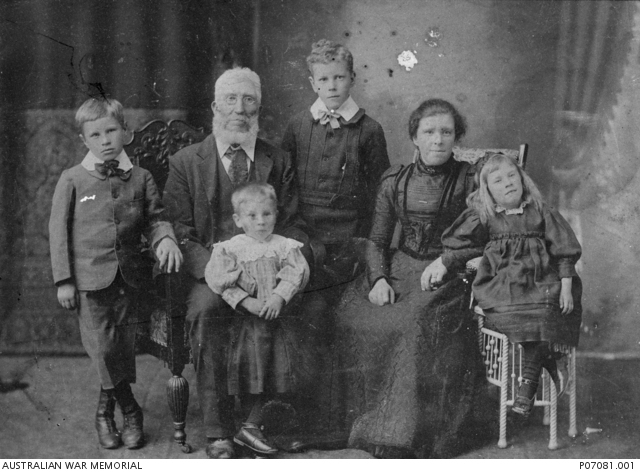 Pre-war family portrait of the Longstaff family of Melbourne, Vic, later of Kiama, NSW. Identified, from left, are: Richard Longstaff, John Longstaff, William Longstaff, either Ann or Marian Longstaff and Nellie Longstaff. Standing in front of John Longstaff is Frederick Longstaff. Both Richard and William Longstaff enlisted for service during the First World War. A miner before enlisting in September 1914, 640 Private (Pte) Richard John Longstaff left Australia for Egypt with the 13th Battalion in December 1914. Having landed on Gallipoli on the afternoon of the 25 April 1915, he was killed at Quinn's Post on 4 May 1915, aged 21. His older brother, 69 Pte William David Longstaff, was a labourer before enlisting in August 1914, and left Australia with the 2nd Battalion in October 1914. He too landed on Gallipoli on the 25 April 1915, and was killed during the attack on Lone Pine on 8 August 1915, aged 23.