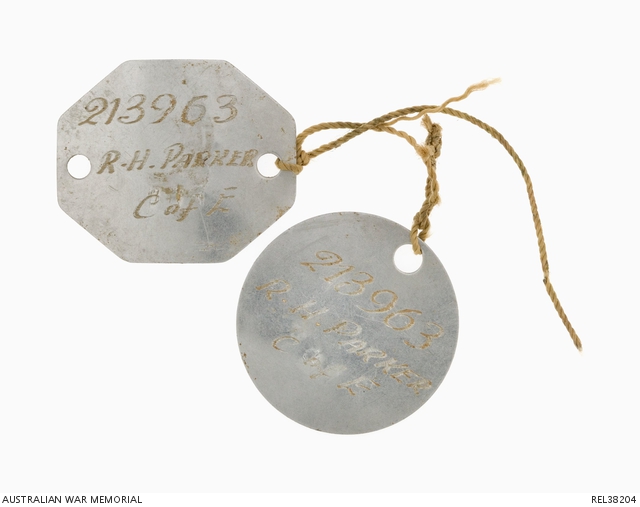 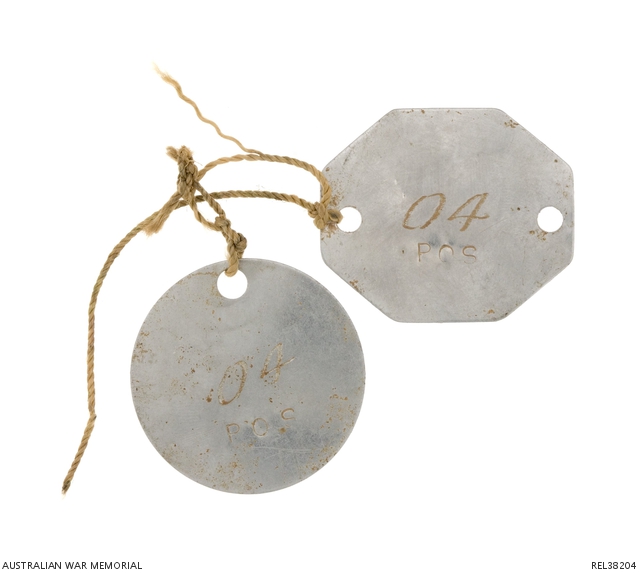 Pair of aluminium identity discs, one round and the other octagonal. Both discs are engraved on the obverse with '213963 R.H. PARKER C of E' and on the reverse with '04'. Impressed below this number are the letters 'POS'. They are tied together with a piece of brown string.

Identity discs worn by Lance Corporal R H J Parker, 1 Battalion, Royal Australian Regiment (1 RAR). Richard Harold John 'Tiny' Parker was born in Sydney, NSW on 22 August 1941. His tour of duty in South Vietnam with 1 RAR commenced on 1 June 1965. In November 1965, 1 RAR joined an American battalion of the US 173rd Airborne Brigade on Operation Hump, a five-day search-and-destroy operation into the enemy dominated territory of War Zone D, about forty kilometres north east of Saigon. On 8 November, while the soldiers of A Company were pushing through dense rainforest near the top of the Gang Toi hills, they struck a strongly defended Viet Cong bunker system. Five men were hit almost immediately at close range. The rest of the platoon quickly went to ground and began returning fire as the wounded men withdrew or were dragged back - all except for Lance Corporal Parker, who had been commanding the point section. Parker had fallen directly in front of the enemy bunkers. Later in the same action, during an assault on the enemy positions, Private Peter Gillson, a machine-gunner with the forward section, was hit by a burst of automatic fire as he stepped around the twisted roots of a tree. He fell just fifteen metres from the enemy position, propped against the roots. Heavy fighting continued and with dusk approaching and at risk of being encircled by the enemy, the Australians were compelled to withdraw, reluctantly leaving the bodies of Parker and Gillson behind. The Australians wanted to return to the Gang Toi hills and a full battalion attack operation was planned later in the month but it was never conducted. Over two years later Australian soldiers returned to the old battleground of Operation Hump when units of the 1st Australian Task Force conducted Operation Coburg during the communist Tet Offensive. But no trace of the missing soldiers was ever found. With the co-operation of the Vietnamese Government, the bodies of Lance Corporal Parker and Private Gillson we found in 2007 and repatriated to Australia. This lighter, his identity discs and a map were recovered with his body. Lance Corporal 'Tiny' Parker was buried at the Woden Public Cemetery, Canberra on Tuesday 12 June 2007.