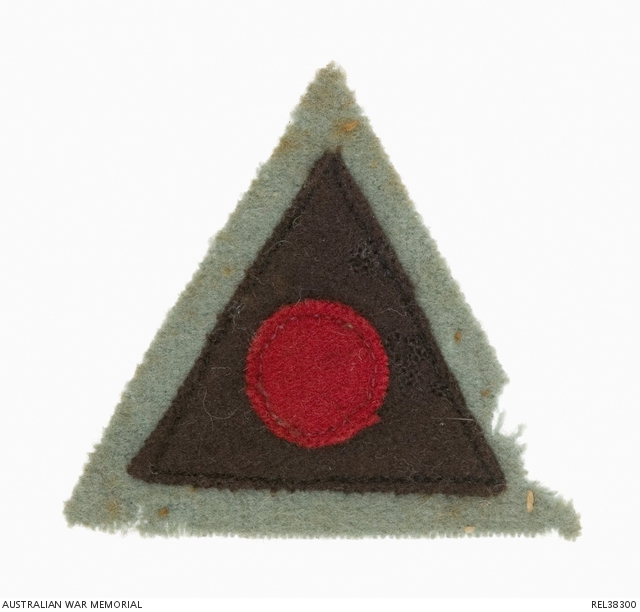 Triangular colour patch for 2/2 Casualty Clearing Station showing a red circle within a dark brown triangle, on a grey background.

Colour patch worn by QX17802 Private Robert Thomas Donovan, born Brisbane 29 September 1919. Donovan had enlisted with the Citizens' Military Force on 28 July 1940 and was discharged on 6 October 1940 in order to enlist in the Second AIF. Qualifying as a TG III Nursing Orderly, Private Donovan was assigned to 2/2 Casualty Clearing Station and embarked for overseas service from Sydney on 14 November aboard HMT Orion, disembarking in the Middle East on 18 December. After service in Lybia and Tobruk, his unit was evacuated in September 1941, returning to Australia aboard the SS Lavington Court, which bypassed Java; the remainder of his unit was captured by the Japanese. The 2/2 CCS embarked for New Guinea on 22 September 1942 where they joined the fighting at Buna and Sanananda. Here Donovan was promoted to Lance Corporal and later transferred to the Australian Heavy Battery at Port Moresby as a Corporal Medical Orderly. During the remaining two years of the war, Corporal Donovan was attached to 2/2 Australian Composite Anti-Aircraft Regiment Workshop, 1 Canadian Special Wireless Group and 11 Australian Base Workshops before being discharged on 10 September 1945 in Brisbane. This patch relates to his service with 2/2 Casualty Clearing Station.