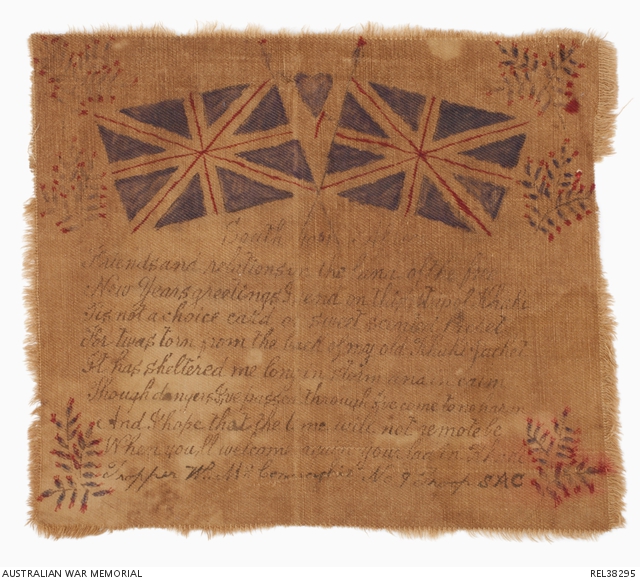 Piece of khaki cotton drill tunic uniform inscribed with a verse of poetry and decorated with designs of crossed Union flags, a heart, and sprigs of red tipped flowers. The poem reads: 'South 1901 Africa/ Friends and relations in the land of the free/ New Years greetings I send on this strip of Khaki/ Tis not a choice card or sweet scented packet/ For twas torn from the back of my old Khaki jacket/ It has sheltered my long in storm and in calm/ Though dangers I've passed through I've come to no harm/ And I hope that the time will not remote be/ When you welcome again your lad in Khaki.' In black ink beneath the poem in a different hand is written, 'Tropper [sic] Wm McConaghie, No 9 Troop SAC'.

William McConaghie was born in 1870 at Ballycastle, County Antrim, Ireland.

In 1900 he enlisted in the South African Constabulary for service in the Boer War. This military body, disguised as a police force, was been raised by Major General Robert Baden-Powell, under orders from Lord Roberts, after Baden-Powell's successful defence of Mafeking. The Constabulary was recruited from British men already living in South Africa, and from Britain, Canada, Australia, New Zealand, India and Ceylon.

McConaghie sent this souvenir home to Ireland, to his brother, John Brown McConaghie. Other examples of the same design and poem on khaki tunic cloth are known to exist and are thought to have been produced as part of a cottage industry in South Africa. The buyer customised the souvenir by adding his name and unit, in his own handwriting, beneath the poem and by specifying whether the souvenir was to mention Christmas or New Year greetings.

John McConaghie emigrated to Queensland in 1908, although William remained in Ireland. John's wife, Ellen (nee Quigg) and children followed two years later bringing the souvenir with them. Members of the Quigg family emigrated at the same time. John died in 1912.