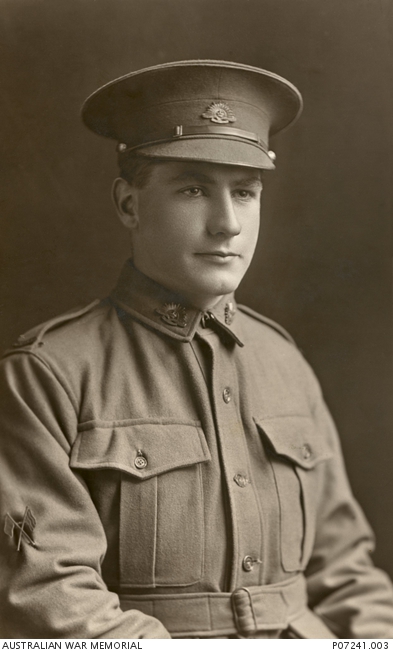 Studio portrait of 1951 Private (Pte) John Harbinger Gibbs, 5th Battalion, of Colac, Vic. A student prior to enlistment, Pte Gibbs embarked with the 5th Reinforcements from Melbourne on HMAT Hororata (A20) on 17 April 1915. Pte Gibbs first became ill whilst serving at Gallipoli. During his service Gibbs was issued with a new service number 154, and attached to Administration Headquarters in London. He was repatriated to Australia on 16 July 1917, and died of illness at his home in Colac, Vic, on 13 October 1917, aged 20. His brother, Lieutenant Richard Horace Maconochie (Mac) Gibbs MC, was killed in action on 19 July 1916 at Fleurbaix, France, aged 23. After the deaths of John and Richard Gibbs, their father Richard Horace Gibbs gave up his medical practice in Colac, Vic, and devoted his work to the medical care of sick and wounded soldiers who had returned to Australia. Richard Gibbs was gazetted a Major in the AIF and appointed Senior Surgeon at No 16 Australian General Hospital. Maj Gibbs was killed in a tram accident in Melbourne in July 1919.