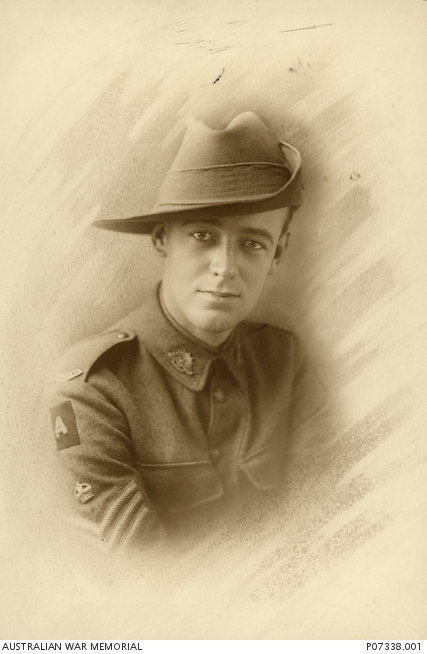 Studio portrait of 1084 Company Sergeant Major (CSM) Richard Keith Phillips, 57th Battalion, of North Williamstown, Vic. A clerk with five years service in the junior cadets and six months in the senior cadets before enlisting in October 1914, CSM Phillips left Australia for Egypt with the 5th Battalion and landed at Gallipoli on 25 April 1915 as a pack driver with the battalion's transport section. After service on Gallipoli, CSM Phillips was transferred to the 57th Battalion in February 1916 as part of the 'doubling-up' of the AIF, and arrived in France for service on the Western Front in March 1916. He was reported missing after the battalion's attack on the German positions at Fromelles on the night of 19/20th June 1916, but was found to have been mildly wounded in the face and suffering from shell-shock and returned to the battalion ten days later. In December 1916 CSM Phillips was admitted to hospital with dysentry, and was evacuated to the University War Hospital in England in January 1917. He was found unfit for war service and was repatriated to Australia in June 1917 where he was discharged from the AIF in October 1917.