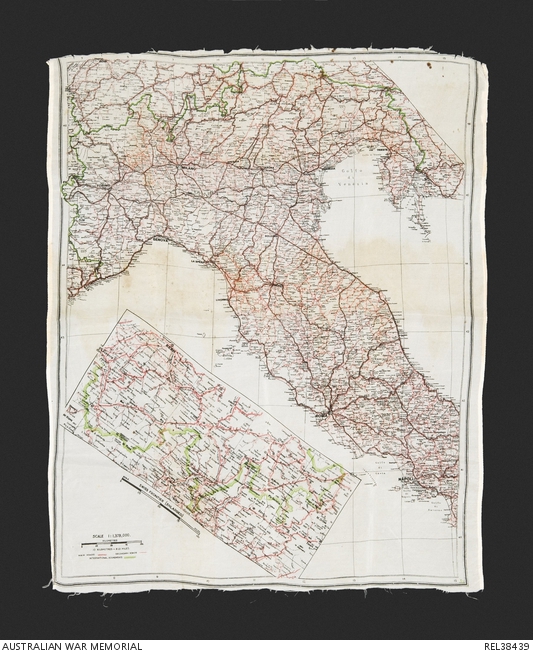 Single sided map numbered J3 printed on silk in black, red and green ink, covering northern Italy (scale 1:1378000) with an enlarged inset map of the Swiss border. The longer sides have stitched edges, while the shorter sides are raw.

This map is associated with the service of Lesley Allea Morrison Fleming-Dunstan who served with the Women's Auxiliary Air Force during the Second World War. Before the war Australian-born Fleming-Dunstan was holidaying with her mother in Italy. After Italy joined with Germany they made their way to England. The night they arrived in London was the first night of the German air raids. Fleming-Dunstan joined the Women's Auxilliary Air Force and trained as an officer at Leighton Buzzard. She served at several Royal Air Force bases in the United Kingdom and during her service was given this fabric escape and evasion map by an airman. After the war Fleming-Dunstan married a British Regular Army Officer, William Stirling Craig and the family lived in a number of places, including Kenya and Mauritius, before settling in Britain.