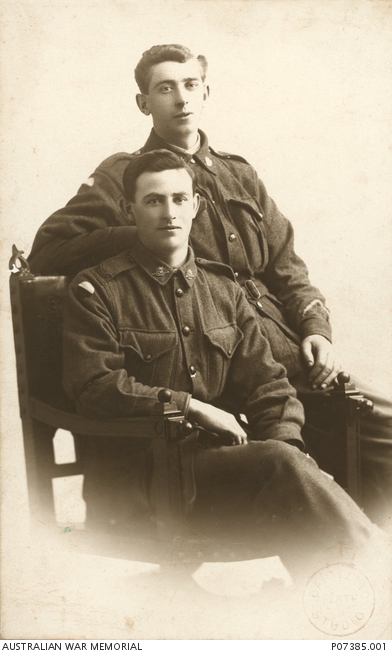 Studio portrait of 3118 Private (Pte) Malcolm Simpson and his brother 3121 Pte Archibald Simpson. The brothers emigrated with their family from the Shetland Islands, Scotland to Fremantle, Western Australia in 1912. Malcolm, an engineer enlisted in the 11th Battalion on 5 July 1915; his younger brother Archibald, a carpenter, enlisted twenty-two days later. They embarked together from Fremantle aboard HMAT Themistocles (A32) on 13 September 1915, joining their unit in Egypt for training in early 1916. Malcolm was promoted to Lance Corporal in January 1916, and Corporal two months later. He was killed in action on 22 July 1916 at Pozieres and has no known grave. Archibald served with the 11th Battalion until early 1916, when he was transferred to the 51st Battalion as part of the 'doubling-up' of the AIF. He was killed in action on 3 September 1916 and is buried at Aveluy Wood Cemetery.