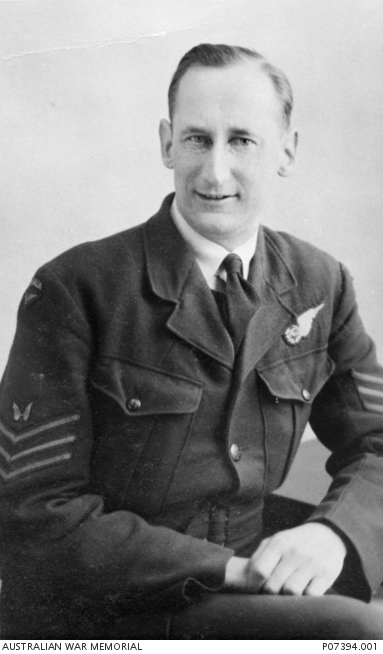 Studio portrait of 401212 Sergeant (Sgt) Nathaniel Robert Goudie of Ballarat, Vic. A grazier and wool classer before enlisting in the RAAF in January 1941, Sgt Goudie trained as a Wireless Operator/Air Gunner (WAG) under the Empire Air Training Scheme (EATS), and after being promoted to Flight Sergeant (Flt Sgt) in February 1942, was posted to 269 Squadron RAF at Kaldadarnes, Iceland, flying anti-submarine sorties in the North Atlantic ocean. Flt Sgt Goudie was listed as missing when his Hudson bomber, serial number FH-423, failed to return from an anti-submarine escort for a convoy travelling south of Greenland on 1 March 1943. Despite extensive searches no trace of the aircraft could be found, and Flt Sgt Goudie and his three crew members were listed as killed on operations. Flt Sgt Goudie was aged 26 at the time of his death and has no known grave.