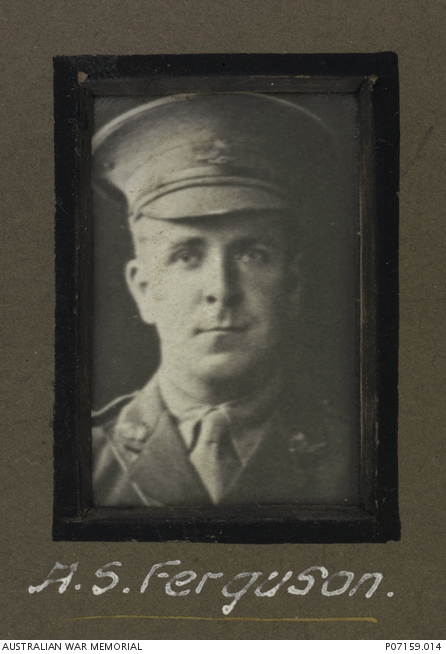 Studio portrait of Lieutenant (Lt) Angus Salier Ferguson, 48th Battalion, who was a 27 year old solicitor from Adelaide, South Australia when he enlisted on 14 January 1916. Although originally enlisted as a Private, he was promoted to Sergeant two months later and then commissioned on 1 October 1916. He embarked for overseas with the 9th Reinforcements from Adelaide on 10 February 1917 aboard HMAT Seang Bee. Lt Ferguson joined the 48th Battalion in France on 22 July 1917 and was killed in action at Villers Bretonneux, France, on 3 May 1918. He is buried in the Adelaide Cemetery, Villers Bretonneux. On 10 October 1918, Lt Ferguson was posthumously awarded the French Croix de Guerre for conspicuous service. One of 131 photographs displayed on an honour board showing members of the Adelaide Rowing Club who enlisted for active service in the First World War. The original is held by the Adelaide Rowing Club who kindly loaned the board to the Australian War Memorial for copying.