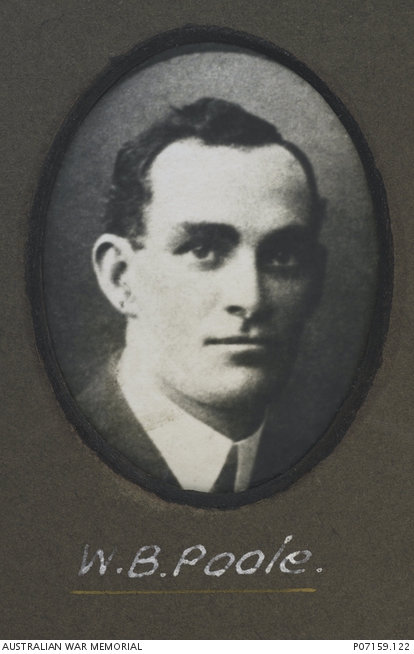 Studio portrait of W.B. Poole, possibly 145 Lance Corporal Wyndham Stanley Poole, 3rd Field Ambulance who was a 28 year old clerk from Prospect, South Australia when he enlisted on 20 August 1914. He embarked for overseas from Adelaide on 21 October 1914 aboard HMAT Soldanha but was then returned to Australia on 24 May 1915 and discharged medically unfit with cardiac disease. He subsequently re-enlisted for home service in the Australian Army Medical Corps on 16 November 1916. Or possibly 21126 Sapper William John Stanley Poole who was a 20 year old telegraphist from Prospect, South Australia when he enlisted on 13 July 1917. He embarked for overseas with the Divisional Signalling Corps reinforcements from Melbourne on 28 February 1918 aboard HMAT Nestor and saw action in France with the 5th Division Signals. After the war, he was married in England on 21 June 1919 and returned to Australia with his wife on 28 October 1919. One of 131 photographs displayed on an honour board showing members of the Adelaide Rowing Club who enlisted for active service in the First World War. The original is held by the Adelaide Rowing Club who kindly loaned the board to the Australian War Memorial for copying.