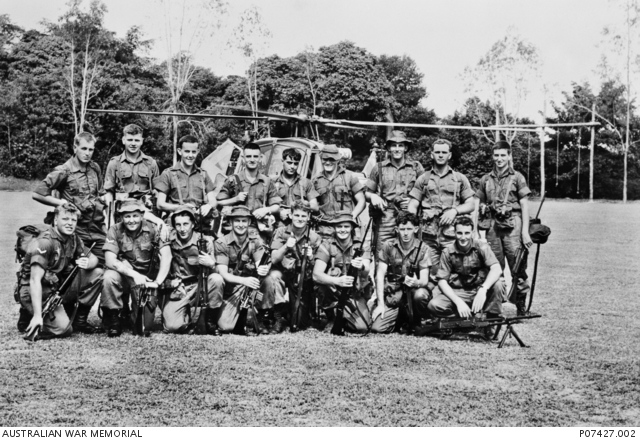 Group portrait of members of 8 Platoon, C Company, 8th Battalion, The Royal Australian Regiment (8RAR), while undertaking helicopter training at a support company oval in Malaya. Identified front row, second from left is 1200097 Lance Corporal (L Cpl) James Joseph 'Jim' Barrett, of Inala, Brisbane. Formerly a member of the regular army with C Company 2RAR, L Cpl Barrett left Australia in early 1966 as a reinforcement to 1RAR, then on operations in Bien Hoa, South Vietnam. When 1RAR returned to Australia he completed the remainder of his 12 month tour of duty with C Company 6RAR. A popular soldier, he also took up the role of canteen manager. In January 1970 he returned to Vietnam with 8RAR. On 28 February 1970 during Operation Hammersley, L Cpl Barrett's platoon was involved in two mine incidents. An engineer party moving to neutralize a booby trap initiated an M16 mine, causing seven soldiers to be killed and thirteen wounded. While looking skyward to marshal a helicopter to evacuate the last casualties, L Cpl Barrett stepped just outside a cleared area, detonating a second mine. He was killed instantly, aged 24, and three others were wounded. One of the wounded later died.