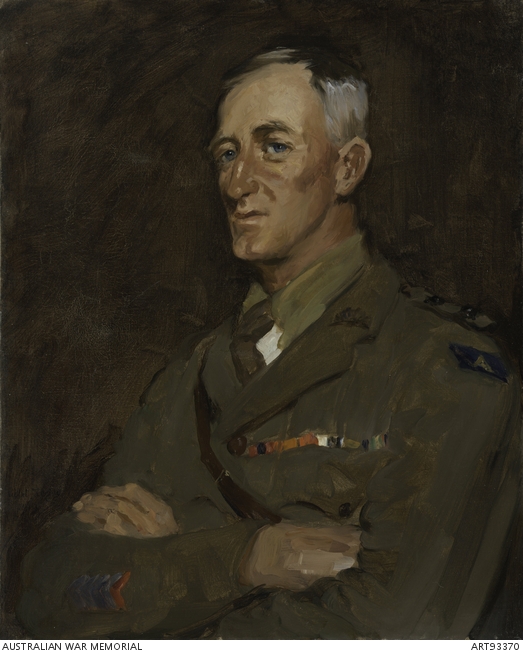 Portrait of Lieutenant Paston Hubert Rede (1881-1924) is a fine example of the artist's brilliant ability to convey a sense of grandeur through simplicity of form and palette. Hubert Paston Rede was the son of Colonel Robert Rede, the goldfields commissioner and sheriff during the Eureka Stockade who after leaving Ballarat subsequently received appointments as sheriff of Geelong, Ballarat and then Melbourne in 1877. In 1878 he was second-in-command in the colony. On 11th February 1902, Paston Hubert Rede enlisted to serve in the Boer War in the 4th Battalion Australian Commonwealth Horse (VIC). In August 1914, Paston Rede enlisted in the 4th Lighthorse Brigade and was later promoted to Lieutenant. On his enlistment form Rede stated his occupation as Station Overseer. Rede received a DCM in 1918 in Egypt, "For conspicuous gallantry and devotion to duty during a raid. He led his men with great dash in the occupation of a hill, and though overwhelmed by numbers several times, he charged into the enemy with fixed bayonets, holding them at bay. His prompt action, bold initiative, and courageous example to his men were of great value." His sister was Geraldine Rede, a friend and artist associate of Violet Teague, which is presumably how Teague met the sitter.
Violet Teague (1872-1951) was an active figure in art and intellectual circles of Edwardian Melbourne. She is now considered a leading artist of her generation alongside contemporaries Rupert Bunny, Hugh Ramsay, George Lambert and E. Phillips Fox. By the turn of the twentieth century Teague was one of Australia's most internationally recognised artists, and her exceptional skill as a portrait painter won her high regard at the Paris Salon and the Royal Academy in London in the 1920s. Throughout her working career, Teague also made important contributions to the development of printmaking. Her Japanese-inspired woodblock and colour relief prints are among the earliest examples in the history of Australian prints. It is for her portraits however that Violet Teague is best known.