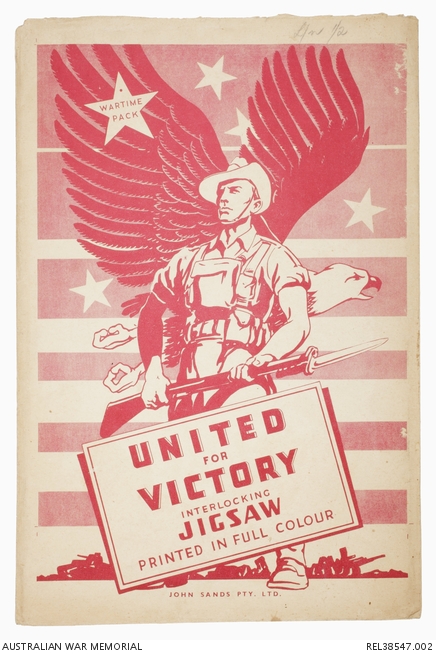 Foolscap portrait format envelope used to store the jigsaw 'United for Victory (Roosevelt and Curtin)'. Both sides are printed in a dull red monotone. The front displays an illustration of a Digger standing with his rifle at the ready, in front of an American Eagle with wings outstretched. 'Wartime Pack' is printed in a star at the top. A label states: 'United for Victory; Interlocking Jigsaw Printed in Full Colour. John Sands Pty Ltd.' The price of 1/2 (1 shilling and 2 pence) is pencilled at the top. The reverse is printed in landscape format and features a monotone reproduction of the complete jigsaw, accompanied by the words: 'This is a small reproduction of the completed jigsaw printed in full colours. Of more than 100 pieces. Each piece interlocking. The completed jigsaw measures 16 x 10 1.2 inches.' A byline at the base states: 'United for Victory Jigsaw. Printed and Produced by John Sands Pty Ltd.'

History unknown. Typical patriotic Australian-produced child's jigsaw puzzle from the late thirties to mid forties period. These were supplied in an outer envelope of the same size as the completed jigsaw, often with a small image of the finished picture on the reverse of the envelope, of which this is an example. The 'wave' style of die-cutting is typical of the period, and of John Sands jigsaws from the mid 1930s to the mid 1950s. The use of one colour confirms the wartime production of this envelope, and the restrictions placed on certain products, such as inks and dyes.