Outdoor group portrait including members of the Rauert family. Back row: all unidentified. Front ... 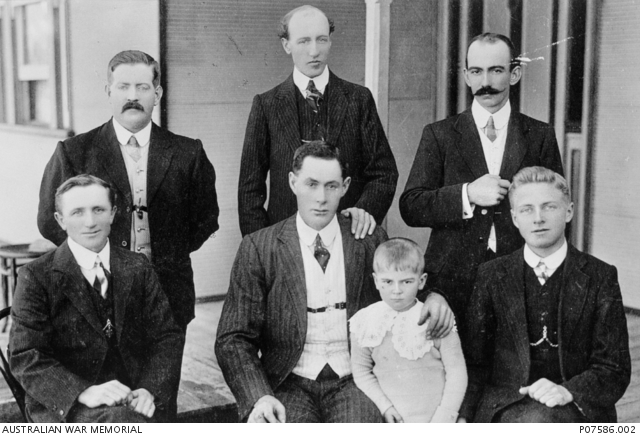 Outdoor group portrait including members of the Rauert family. Back row: all unidentified. Front row, left to right: Sydney Charles Rauert; unidentified; Norman Alfred Rauert; and Percival Louis (Percy) Rauert. A labourer in civilian life, 1122 Private (Pte) Sydney Rauert enlisted on 7 April 1915. He became ill at Broadmeadows Camp and was admitted to Melbourne Hospital on 7 May 1915. Pte Sydney Rauert was returned to Broadmeadows camp where he died of measles, bronchial-pneumonia and heart failure on 15 May 1915, aged 22. His brother, then Sergeant Percy Rauert, was by his side when he died and had attended to Sydney's needs while he was ill. A draper prior to enlistment, Percy Rauert embarked as a second lieutenant with the 6th Battalion, 15th Reinforcements, from Melbourne on HMAT Wiltshire on 7 March 1916. Following a promotion, Lieutenant (Lt) Percy Rauert he was awarded the Military Cross (gazetted, London, 27 October 1917) for his actions on 20 September 1917 near Ypres. The award was 'for conspicuous gallantry and devotion to duty. He was in charge of a mopping-up party in an attack, and showed great courage and skilful leadership in clearing concrete emplacements of the enemy. When his company commander had been wounded he took command of the company and handled it with great skill and judgement'. He returned to Australia late in 1919 and was discharged on 28 February 1920. VX89427 (V225011) Corporal Norman Rauert enlisted in the Australian Army in the Second World War and served with 7 Battalion.