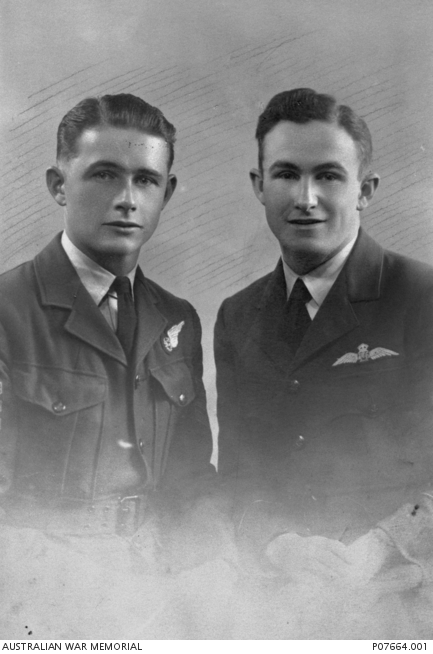 Studio portrait of brothers, 420786 Sergeant (Sgt) Reginald John Peck , RAAF, of Katoomba, NSW, (left), and 422688 Pilot Officer Harold Phillip Peck, RAAF. A carpenter prior to enlistment, Sgt Reginald Peck embarked from Sydney on 19 August 1942 for training in Canada. Whilst attached to 86 Squadron RAF and with the rank of warrant officer, he was accidentally killed on 18 November 1944 near Banff, Scotland. He was aged 24. Pilot Officer Harold Peck was promoted to the rank of flight lieutenant and also served with the RAF. He was awarded a Distinguished Flying Cross (DFC), gazetted 23 March 1945, for 'skill and fortitude in operations against the enemy'.