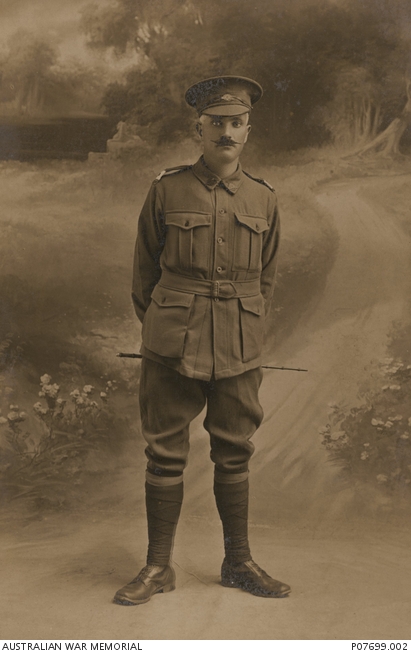 Studio portrait of 704 Private (Pte) David West (Dave) Beattie, 36th Battalion. Born in Scotland, Pte Beattie emigrated to Australia at the age of 24 and worked as a nurseryman in Mascot, NSW, prior to enlistment. He embarked with C Company from Sydney aboard HMAT Beltana on 13 May 1916. Moving to the Ypres Sector in Belgium with his unit from France in mid 1917, Pte Beattie was listed as missing in action on the first day of the Battle of Passchendaele. An eyewitness later stated that Pte Beattie was among the members of a Lewis gun team sheltering in a shell hole to the right of Beavue Hill. The remains of the gun and crew members were discovered later the same day, the men having been killed by shell fire. Pte Beattie was officially reported killed in action on 12 October 1917, aged 32. He has no known grave and his name is commemorated on the Ypres (Menin Gate) Memorial, Belgium.