Informal group portrait of crew members of HMAS Psyche, with a sign which reads 'hook rope ... 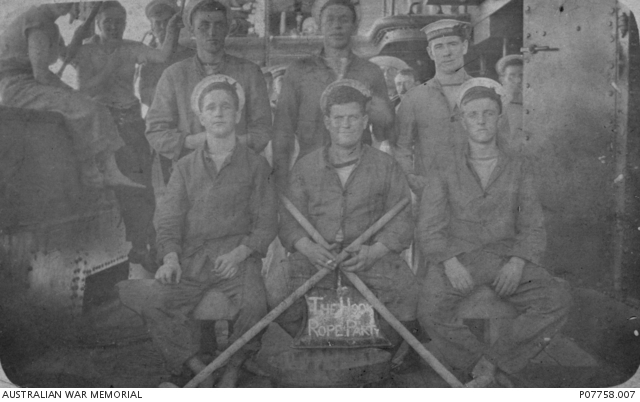 Informal group portrait of crew members of HMAS Psyche, with a sign which reads 'hook rope party'. It is the men in this group flake the cable into the cable locker when shortening in or weighing the ship's anchor. A hook rope is a wire or hemp rope, generally from 10 to 15 fathoms long with an iron hook at the end. 2140 Charles Sykes McIntosh Johnston is standing in the back row, far right. Commissioned in 1899 as a light cruiser, Psyche served with the Royal Navy on the Australia Station prior to the First World War. In July 1915, Psyche was commissioned into the RAN. and was ordered to the Bay of Bengal. Based at Rangoon,it carried out routine patrols along the Burma Coast and Malay Archipelago. Disease, combined with poor food, inclement weather and dull duties led to dissatisfaction and indiscipline that culminated in several court martials in February and March 1916. Psyche was recalled to Singapore and an inquiry was held into the problems on board. Psyche returned to duty in the Bay of Bengal in April 1916 and in June 1916 she was redeployed to Hong Kong to patrol off the South Coast of China and Indo-China. Poor conditions continued to prevail aboard and in July 1916 almost a half of of the crew were suffering from illness. HMAS Psyche returned to the Bay of Bengal in October 1916 and continued patrol work until she was recalled to Australia in September 1917, and paid off.