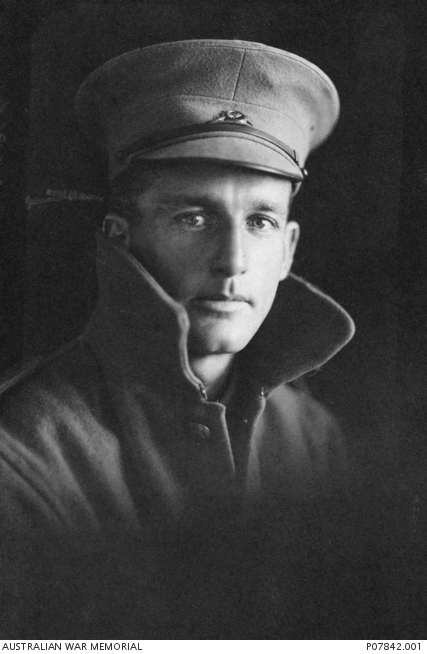 Studio portrait of 7306 Gunner (Gnr) Leslie Russell Blake, 5th Field Artillery Brigade, of East Malvern, Vic. A geological surveyor who had been part of Sir Douglas Mawson's Antarctic expedition from 1911 to 1914, Gnr Blake enlisted in July 1915 and left Australia for Egypt with the 13th Battery with the rank of Sergeant (Sgt) in November 1915. After being commissioned with the rank of Second Lieutenant (2nd Lt), he arrived in France for service on the Western Front in March 1916 and promoted to Lieutenant (Lt) in August 1916. Lt Blake was awarded the Military Cross (MC) for "[showing] conspicuous and consistent gallantry during the Pozieres operations" for surveying the Australian positions between Mouquet Farm and Pozieres, and in January 1917 was Mentioned in Despatches (MID). In March 1917 Lt Blake was transferred to the 2nd Division Artillery Headquarters where he assumed duties as a staff reconnaissance officer, and in September 1917, was wounded in the arm by shrapnel in the Polygon Wood area. Rejoining his unit in January 1918, Lt Blake was promoted to Captain (Capt) in May 1918 and was severely wounded by German artillery fire at Hargicourt on 2 October 1918. He was evacuated to the 58th Casualty Clearing Station at Tincourt where he died the following day, aged 27. A photograph of Capt Blake was taken by official photographer, friend and fellow member of Mawson's Antarctic Expedition, Capt Frank Hurley, which appears in the Memorial's collection at E00661.