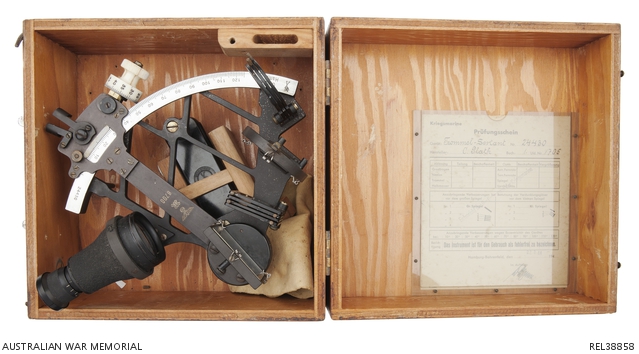 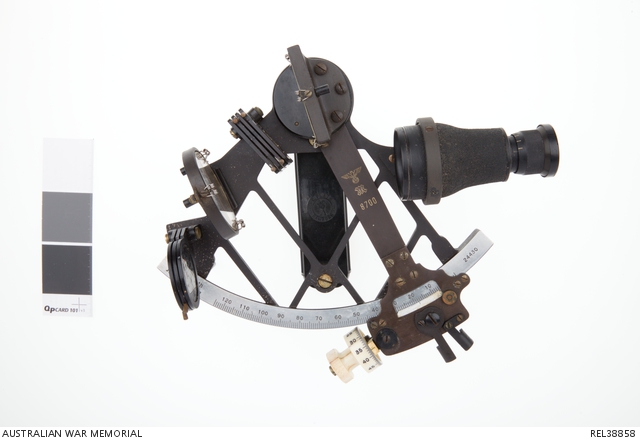 German made Micrometer sextant and storage box. The frame and the arc of the sextant are stainless steel. The frame has been painted black and the arc is polished steel. The left side of the arc has been stamped with the maker's symbol, a stick figure holding a sextant and name 'C. PLATH / HAMBURG'. The gradations running right to left start from 0 and finish with 120 and have been stamped onto the arc and inlaid with black paint. On the right side of the arc is stamped the number '24430'. On the bottom of the arc is a groove for the index bar's rail to slide through and a series of teeth for the index bar's clamp to lock into when being used. Mounted to the apex of the frame is the index bar which extends down over the arc and locks into the track under the arc. At the top of the index bar is mounted the index mirror. Stamped on the index bar near the index mirror is the German eagle and swastika. Beneath that is stamped a runic 'M' and beneath that is stamped the number '8700'. The stamped icons and numbers have been inlaid with white paint to make them stand out. At the bottom of the index bar is the viewing slit with the clamp mounted underneath. To the left of the viewing slit is mounted the micrometer drum which is white bakelite and is used to correct measurements during use. The drum has gradations imprinted around the drum and inlaid with black paint running from 0 up to 55 and back to 0. On the right hand side of the frame is a ring mount with a monocular attached with screws. The monocular is metal and has a textured finish on the outside. The viewing end is open and adjustable to suit the user's eye. On the left side of the frame immediately next to the index mirror, are a series of four shade glasses to diffuse haze and light. Further down the left side of the frame is the horizon mirror. The horizon mirror is divided vertically with the left side transparent and the right side mirrored. Mounted just behind the horizon mirror are three more shade glasses for the horizon mirror. A handle is attached to the back of the frame by steel supports. The handle itself is bakelite and has ridged edges for grip. Inlaid on top of the handle is a maker's mark depicting two concentric circles. The inner circle contains a stick figure holding a sextant. In between the two circles are the maker's details 'C. PLATH HAMBURG' in raised lettering. On the underside of the handle is a large rectangular recessed area with raised writing on the base 'HRS'. In the middle of the base are the numbers '9366' inside a raised circle. When being used horizontally, there are three legs on the bottom of the frame and apex to support the sextant. The first leg is the top steel support for the handle which extends through the handle. The other two steel legs are located at opposite ends of the arc. The wooden storage box is of a solid construction with the lid and box sides finger joined and glued at the edges. The roof of the lid and base of the box are separate pieces which are attached at the back by two brass hinges and three brass screws on each side of the hinges. On the opposite side of the box two brass screws have been left slightly proud of the lid and two brass locking arms have been screwed into the base. When joined, these secure the box. Between the two arms, a collapsible aluminium handle has been attached with screws. Inside the lid of the box is a piece of clear perspex secured by three small brass screws on each side and on the bottom forming a pocket. Inside the pocket is the original German Navy instruction card. It is printed in black ink on off-white paper. Attached to the bottom of the box on an angle is a wooden support for the sextant. It has a locking arm which crosses the handle when in place, keeping the sextant from being damaged during movement.

This sextant was used by Herbert Woodville Bolles during his post-war career with the Merchant Navy. Bolles was born in 1923 in Brisbane and he commenced his tenure with the Merchant Navy on 4 March 1941 when he signed his 'Indentures of Apprenticeship to the Sea Service' at the Mercantile Marine offices in Townsville. The first ship he served on was the passenger ship 'Ormiston' which sailed the Australian eastern sea board. On 17 December 1941, Bolles along with another shipmate transferred to the cargo ship 'Macumba'. The 'Macumba' plied the eastern seaboard and travelled to Port Moresby on numerous occasions. In March 1943, Bolles joined the passenger ship 'Tanda'. Over the next year the ship made many voyages to Sri Lanka and India with various cargoes and passengers, including on one journey General Sir Iven and Lady Mackay. In June 1944, Bolles was promoted to Third Officer and joined the 'Mildura'. He was transferred again several months later to 'River Fitzroy'. In March 1945, Bolles was transferred to the 'Corinda'. This was his last posting of the Second World War. He finished the war as Second Officer on the 'River Fitzroy'. Bolles had several lucky escapes during the war. The 'Ormiston' was damaged and 'Macumba' and 'Tanda' sunk after Bolles had been transferred. Bolles bought the sextant from a chief officer who had been in one of the first ships to arrive in Singapore after Japan's surrender. The chief officer liberated three of the sextants from a stores depot on the Singapore docks. Bolles paid twenty five pounds for his sextant and quickly became the envy of his fellow officers as this type of sextant had not been widely distributed at this time. During the post war period, Bolles served on a variety of merchant vessels including as a Sydney Harbour sea pilot before retiring in 1984 as a Captain.

Of particular historical note regarding this sextant, Nazi German U-boats serving as part of the “Monsun gruppe” (monsoon group) operated out of Penang (Malaya), Java and Singapore during 1943-1945. They were active in both the Indian and Pacific Oceans, including attacks in Australian waters. This included U-862, captained by Korvetten Kapitan Heinrich Timm.

The late war date of manufacture of this sextant indicates that it was brought to Singapore in a highly secretive and dangerous U-boat journey in mid-late 1944/early 1945. Relics relating specifically to the relatively unknown Nazi German servicemen and U-boats that were based in Singapore are today very rare.